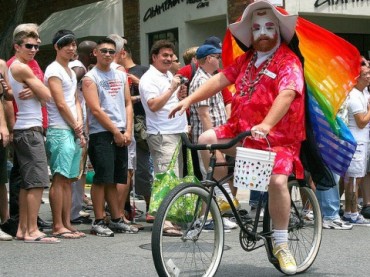 Bike Forth, a bike shop run by an organization called the Davis Bike Collective, made a decision back in February to deal with “male dominance” in cycling: dedicate every other Tuesday to women and those who identify as trans(gender) or femme.

The DBC operated as the Davis Bike Church at the Domes at the University of California-Davis campus from 2004-2009.

Volunteers with the DBC began to notice that — gasp! — most of its customers were men. Thus, they felt they had to do something about this bicycle patriarchal hegemony.

WTF (Women Trans Femme) night is Bike Forth’s response to the common view that bike maintenance is predominantly for men.

“The idea is for people who might feel uncomfortable coming to the shop in general to have a safe space to come and learn about bikes,” said Anne Hereford, a volunteer at Bike Forth who helped initiate the latest incarnation of WTF night in Davis. “At the shop it’s a very supportive community, but some people still feel intimidated about coming to work on their bikes, specifically women and people who identify as women. We want to empower them to work on their bikes, and if that means having a special night where they can come and not feel intimidated then that’s what we want to offer.”

Van Wyk, who is also responsible for the return of WTF night, said it started in Davis in 2008 and has made a few comebacks in the years since. After starting as a volunteer for the Bike Collective, she decided to begin a new iteration to help these marginalized groups get a handle on bike maintenance.

“If you don’t know how to work on your bike it can often be intimidating, or you have the experience where you come in and someone says, ‘Let me do it for you,’” Van Wyk said. “This happens in mechanical realms. This happens across the spectrum in traditionally male-dominated activities.”

Part of addressing this intimidation includes limiting access to the shop on those Tuesdays to only people who identify with the WTF community.

“We don’t exactly turn people away — we say, ‘Do you identify as part of this community?’” Hereford said. “If you don’t feel you’re a member of the Women Trans Femme community, this is not a space that you’re invited to. So it’s more of a self-selection.”

People who identify as men are encouraged to go to the shop’s regular open hours on the other days of the week.

“There are still women and transgender people in our society who feel intimidated when they’re in a male-dominated space,” Hereford said. “Frankly, the shop is often male-dominated. If you go in on an afternoon that is not WTF you’re likely to see more men than women.”

So, it’s not enough to have just a “biking community” — even that is broken down by the social justice warriors into the usual race/gender/ethnicity/sexuality component parts.

And what a relief that the DBC doesn’t exactly turn people away … but if you need bike service on that every other Tuesday — and you’re a guy — you’re either out of luck or you’ll have to lie that you identify as “trans-female.” Or something. Good thing they’re not a Christian bakery or pizza shop, eh?