For one of his fall semester courses, a transgender student at the University of California Davis “planted” a bunch of plastic penises in the dirt near the campus library … to highlight what life is like for trans students.

Kaiden Zaldumbide’s assignment for the course ART 151 was to “make 100 copies of an object,” according The Aggie. His original plan was to copy images of a tampon to symbolize how so-called “tampon taxes” result in gender inequality.

However, a packet he got from the campus LGBTQIA Resource Center gave him a better idea: “I was like, ‘I wanna do 100 d-cks!’”

Zaldumbide’s, er, piece was titled “My Vagina” and featured the statement: “I am a transgender male and I experience gender dysphoria. But no one has ever asked me where I experience it.”

The sophomore said, “Let me turn the prime symbol of masculinity and turn it into something viewed typically as gender neutral or a more feminine sense.” 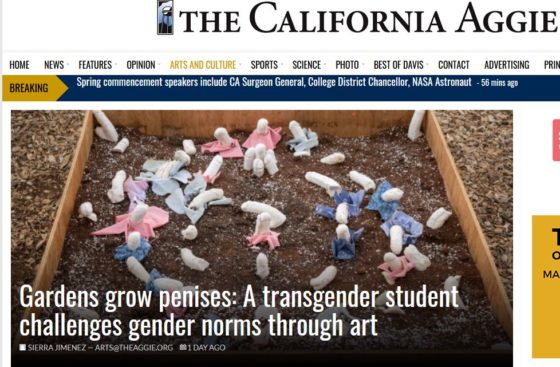 “That is kind of what I wanted to do, I just wanted to tell my story and to show people an insight on what it is like to be transgender,” he continued. “One, it is a very unique experience, and two, it is a very hard experience to try and understand and empathize with. [Being transgender] is completely foreign to cis[gender] people. I want to share who I am and the way I have grown up. How it is sort of isolating to feel like gender norms were pushing me to feel a certain way and me not realizing that it is okay to feel different and otherwise.” …

“I feel like the role of genetalia [sic] and its connection to gender norms in society is very archiac [sic] and very dumb and unecessary [sic],” Zaldumbide said. “[Genitalia] don’t better you in any way, they don’t need to be defining characteristics. Even though it can, I don’t feel like it should be playing a role in gender.”

Zaldumbide noted he received messages from transgender men informing him “how beautiful” his project was, and “how much they could relate to his experience.”

MORE: Virginia Tech on the hunt for campus penis artists