The University of North Carolina’s Daily Tar Heel engaged in an … interesting piece of investigative work this past week: It dissected the social media accounts of “many prominent students on campus” to see what it could dig up.

The title of the article cleverly rationalizes it: “UNC Student Body President’s offensive tweets reflect careless nature of social media.” The DTH’s Maddy Arrowood writes “The intersection of race, language and social media has become a prominent issue in the national dialogue as the things said online begin to have real-world ramifications.”

So, what did the Student Body president say that was “offensive” and “careless”?

Back during Savannah Putnam’s high school years, she put out a few tweets that included some questionable language. For example, four years ago (when she was 17) she tweeted “Like dang all a nigga wanna do is play monopoly with her main thots.”

Her other “sins” included “When people are like ‘I axed him a question’ I’m like ‘you cut a hoe?’” as well as “That is so ghetto;” “We’re in the straight hood;” and “Outta the hood.”

Arrowood rationalizes making an issue of Putnam’s tweets by noting there’s been a few high profile incidents involving social media and offensive (racial) lingo, including one regarding a UNC field hockey player.

Allegedly, Putnam was the only person who had written something objectionable.

Elizabeth Pryor, an associate professor of history at Smith College, said these incidents are hardly rare. Pryor has taught, researched and written extensively on the history and societal impact of the n-word.

“It’s not about her, it’s not about the incoming Student Body President, it’s about this kind of thing happening all the time,” she said. “And most of the time, I see a lot of reluctance to apologize and a lot of making excuses, rather than saying, ‘Wow, that’s a part of my history that I’d like to better.’”

Pryor said that she sees denying or downplaying the impact of words used in the past as a lazy way for a person to suggest they are grappling with racism without actually evaluating themself.

“It just shows that they didn’t really care that they caused harm, and they still don’t,” she said.

Black Student Movement Vice President Alex Robinson said that though she believes in giving people room to grow and change as they get older, the age of these tweets does not discount the importance of the issues they present.

“I was really disappointed that she didn’t even apologize, and that she chose to pivot away from the issue and attack the press,” she said. “As a student leader, you have to be accountable to your public … and I think understanding can be extended to a certain level if these are things you said when you were younger, but not to the point of excusing you from apologizing and holding yourself accountable for what you said.”

Putnam told the DTH that “I don’t think journalism should involve pulling quotes from 12-year-olds who obviously have a lot to learn about the world. This obviously isn’t something that I stand by, as evidenced by a platform centered around inclusivity.” She added:

I take pride in what I’ve done at Carolina, and what I’m doing at Carolina, which is what the DTH should be covering — things like instating a diversity council, implicit bias trainings, and working tirelessly on mental health efforts on campus, coupled with about a million other positive things.

On Thursday, Putnam posted the following apology on her Facebook page:

It’s worth reading the article comments as Arrowood and the DTH don’t come off very well. In fact, a cursory examination of Arrowood’s own Twitter account shows she recently retweeted an Atlantic article that many had found offensive: 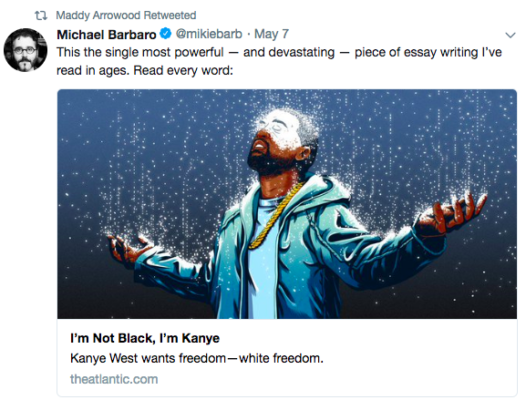 With this retweet does Arrowood endorse the notion that if an African-American thinks and believes differently than most of his peers … that he is then not “really black”?

Of course, RTs do not necessarily signify endorsement; however, if you peruse Arrowood’s Twitter feed you’ll notice it is chock full of politically progressive material, while at the same includes many anti-conservative and anti-Trump tweets (and retweets).