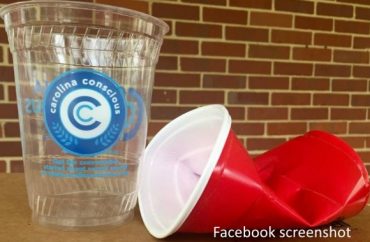 Protecting the environment and stopping sexual assault are two concepts rarely linked – yet an activist group at the University of North Carolina Chapel Hill has managed to combine the two on an unlikely source: party cups.

Yes, the ubiquitous red cups favored among partying college students nationwide were recently swapped out at a UNC fete with clear cups declaring “Respectful of each other. Grateful for the earth” on one side, “Get the conversation started about sexual assault” on the other, and a tagline: “Please compost this cup.”

The activist group behind the cups is Carolina Conscious, which describes itself online as “a growing group of students dedicated to helping the entire Carolina community improve our campus.” Their main brainchild so far is the compostable, disposable cups that aim to “act as a reminder to maintain conscious, ethical behavior in social settings,” the group says on Facebook.

One of the first prevalent debuts of the cups occurred in late April when the Phi Delta Theta fraternity swapped out their traditional red cups for the Carolina Conscious ones at their annual “Catalina Wine Mixer.” The effectiveness of the cups’ message, however, did not appear to widely resonate at the party – at least when it comes to protecting the planet. Many of the Carolina Conscious cups could be seen trashed on the ground both during and after the celebration.

“I noticed the cups because someone made a joke about them a couple minutes ago, but otherwise I wouldn’t have noticed them,” one partygoer told The College Fix. Another attendee approached a day after the party was asked about the cups. His reply? “I think they were just Styrofoam cups, right?”

The cups also include the group’s website, which links to sexual assault resources and other stats. The website also reminds students to “ensure every sexual encounter is consensual,” “stay mindful of your actions in social settings,” and “be more than a bystander.”

This spring, some 26,000 cups were ordered and given a “limited release” at four UNC fraternities, four residence halls, and a few off-campus organizations, their website states. More are slated to be produced this fall.

“I don’t think this is going to end the stigma by any means. I don’t think it should, to be honest. Because I think that stigma is a reflection of a problem,” Senior Patrick Lowery, a co-founder of the group, told the paper. “But what I think it can do is allow fraternities to be a part of the solution.”

In an interview with The College Fix, Phi Delta Theta president Sam Clements said he felt trying out the cups at the mixer was the right call.

“We felt that the Carolina Conscious cups would be a good substitute for normal solo cups as they help create an atmosphere that is aware of sexual assault and is also much more environmentally friendly,” he said via email. “By using the cups, we hope to create an environment where sexual assault prevention is in the forefront of everyone’s mind, which will hopefully curb this all too prevalent issue within our community.”