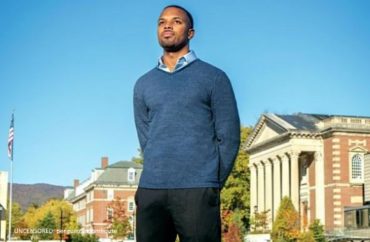 Sure, “Social Justice Warrior” students deserve some responsibility for speakers and controversial ideas being shouted and shut down on campus and in the classroom, said Zachary Wood, a recent Williams College grad and author of the new book “Uncensored.”

But ultimately, Wood said, these are 18- to 22-year-olds who don’t have much life experience yet and should not shoulder the lion’s share of the fault for the campus censorship epidemic.

“They don’t have everything figured out,” Wood said in an interview with The College Fix. “Administrators and educators are more the problem than students, because who is really setting the example here?”

It’s not students fault, he added, that 95 percent of everything they study in the social sciences and humanities expresses liberal bents, and that students who express right-of-center views are graded down and looked at funny by professors.

“At Williams, most of my professors taught their perspective on any given issue as if it were fact instead of delving into opposing views to create well-rounded lessons,” Wood writes in “Uncensored: My Life and Uncomfortable Conversations at the Intersection of Black and White America.”

“Around campus, progressive ideas were lauded while conservative ones were shut down for being insensitive. The few conservatives at Williams were largely scared into silence, knowing that if they went against the status quo they would be labeled as biased and wrong.”

Wood, whose new book chronicles his personal story of a difficult childhood combined with his battle to bring free speech to Williams College and encourage left-leaning peers to listen to uncomfortable ideas, said the adults in charge of universities are ultimately where the buck stops.

“When you are just solicitous to the rhetoric of trauma and anything goes, then you have to have an oversight committee, take art down, change this name — these are administrative decisions,” he said.

Wood, a self-described liberal Democrat, said student complaints can be valid and sincere, and he “understands their pain.” It’s the adults in charge who need to teach them perspective and how the real world works.

“We have got to do a little less on the attacking of social justice warriors and … hold responsible the people who have PhDs and understand what this is about,” Wood said.

Adults know hearing uncomfortable ideas is a part of life. Campus leaders should not shelter that from students, said Wood, who as president of the campus club Uncomfortable Learning tried to teach that to peers at Williams in 2016. That’s when he invited author John Derbyshire to talk about his critical views on subjects related to blacks. Williams College President Adam Falk canceled the event. Wood said Falk was more concerned about his own reputation than what was best for students longterm.

“Adam Falk did not want to be known as the guy who let John Derbyshire speak on his watch,” Wood said.

With that, it became a missed opportunity to learn about, question and thoughtfully challenge Derbyshire, Wood said. But campus presidents should set the example. Students need to learn to hear other sides and debate, Wood said, calling it a “fundamental life skill” and a pathway to becoming a “contributing member of society.”

His battle for this belief has been at a cost. In college, a note slipped under his door stated “your blood will be in the leaves” next to an image of a tree. On social media he was told: “We need the oil and switch to deal with him in this midnight hour.” He was also called all sorts of names and a traitor to his race, both to his face and behind his back.

“Honestly, life is rough, life is rough,” said Wood, who also grew up poor and whose book chronicles the pain he endured with a mother who battled mental illness. Wood said campus leaders do a disservice to students when they protect them from the harsh realities of life.

In the Derbyshire case, “it would have been a really big learning experience if my administration would have said, ‘We have faith in our student body to handle this controversial speaker.'”

They can respectfully protest in a way that’s not disruptive, they can ask tough questions in a Q&A, they can write op-eds, Wood said. There’s so many productive options.

“These are the kinds of tensions that need to be fleshed out … otherwise your education is groupthink and confirmation by assimilation,” said Wood, who majored in political science and has aspirations to run for president one day. Having graduated earlier this month, he will begin work as an assistant editor at The Atlantic this fall after he finishes his book tour.

To help fix higher education, campus presidents and professors needs to allow and promote a diversity of opinions, he said. Pressure should be applied to make that happen, through media coverage, parent and alumni feedback, in faculty meetings, and elsewhere. Groups like Heterodox Academy and campus speakers and debates should also be supported, he said.

Heterodox Academy has resources on its website on how to support free speech and academic freedom, Wood said, adding: “Pay attention to the work that they are doing consider the solution they propose.”

At a divisive political time when talk of “Civil War” gains steam, the fate of the nation’s ability to coexist may very well be at stake.

“As the topic of free speech on college campuses has continued to cause controversy, protests, and even bursts of violence across the country, the criticism most often levied against campus activists is that they’re too sensitive. On campus, their feelings are coddled. Class materials that may be upsetting are given a trigger warning. Speech codes restrict many college students from talking about certain subjects. And controversial speakers such as [Suzanne] Venker and Derbyshire are kept away,” Wood writes in his book.

“The result is millions of college students who have little tolerance for healthy debate and view someone voicing his or her opposing view as an attack on their very personhood.”

MORE: Suzanne Venker disinvited to speak at Williams after protests

MORE: Here’s the speech students at Williams were too outraged to hear