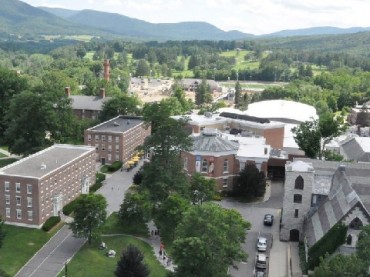 WILLIAMSTOWN, Mass. – Decades ago, Williams College had a reputation as a preppy, country clubish university, and it was in the midst of this atmosphere that a famed professor at the New England campus, Robert Gaudino, exposed students to the so-called real world.

He’d ship them off – as close as America’s inner cities to as far away as Calcutta – to spend some time getting their hands dirty, so to speak; a process he called “Uncomfortable Learning.”

“He would just put them on a plane and give them a much more viable academic experience confronting the world, the real world, instead of the ‘Purple Bubble,’” said Williams College’s Ben Fischberg, 22. In the spirit of exposing students to the realities of the real world, Fischberg and two other students started their own “Uncomfortable Learning” effort at Williams earlier this year.

But this time, instead of confronting the problems outside the “Purple Bubble,” the trio of students took aim at issues within their 221-year-old elite university, which – like so many others – has created an atmosphere in which academics and intellectual debate are heavily influenced by left-leaning scholars, and a diversity of opinions – especially conservative ones – do not openly flourish.

It’s a college in rural New England where talk of white privilege and oppression are just as commonplace as at other elite colleges in that region and beyond, but sometimes felt even more so because of the campus’ intimate size. At about 2,000 undergrads, it has fewer students than most mainstream public high schools.

So perhaps launching Uncomfortable Learning took more guts than might be expected at a place like Williams, but the students who launched the endeavor said in interviews with The College Fix that they wanted to add to their education, expand their beloved institution’s horizons, and challenge themselves and their peers to search beyond the echo chamber found today at most colleges.

“There is no learning, without being uncomfortable,” said Williams College student David Gaines at the group’s April 29 event. “One cannot learn and grow without being challenged and made to think.”

With a desire for a more robust college debate than their classroom time produced, Fischberg, along with Gaines and fellow student James Hitchcock, challenged the status quo and formed their student club. The three students emphasized the project was not borne out of a lack of rigor on their professors’ part, but rather a desire for a well-rounded college experience. “We created Uncomfortable Learning out of a desire to push our Williams education further and to challenge ourselves and the Williams community,” Fischberg said. “We aimed to expand the dialogue at Williams on certain issues that was restrained.”

Delving into the ‘Restrained’

To that end, Uncomfortable Learning hosted five guest lecturers in the spring of 2014 on topics that were not readily broached within the classrooms.

KC Johnson, a past Williams professor who is now a history professor at Brooklyn College and the City University of New York Graduate Center, kicked off the parade of highly regarded intellectuals who visited the campus during the school year in his January address titled: “Educating Dangerously: How History is Being Mistaught in U.S. Universities.”

In introducing Johnson, Fischberg told the crowd that he was excited for the launch of Uncomfortable Learning, noting that “we are looking forward

to having speakers who challenge the Williams orthodoxy and promote intellectual diversity on campus.”

Johnson talked about how history professors focus more and more on narrow subject matter that can often be politically charged at the cost of not offering a fuller historical curriculum, often lacking in western and American history.

Renown economist Richard Vedder, a professor at Ohio University and the director of The Center for College Affordability & Productivity, focused his speech on how the federal government is waging a war on work, offering “perverse incentives created by the U.S. welfare system,” Fischberg said.

The talk also explored how lowering the minimum wage would not only benefit the U.S. economy, but minority workers in particular. And many in the audience expressed surprise to learn that the majority of economic studies on the minimum wage support the notion that if it’s raised, it is likely to lower employment.

Greg Lukianoff, president of the Foundation for Individual Rights in Education, gave a talk on how colleges suppress free speech and enforce draconian and unconstitutional speech codes. One example he gave was Drexel’s prohibition on derogatory laughter, for example.

National Review’s Jonah Goldberg, author of The Tyranny of Cliches: How Liberals Cheat in the War of Ideas, spoke on how liberals use clichés to prevent debate. He argued that issues such as social justice and microaggressions are tools used by certain groups as values that someone cannot disagree with – unless they are a racist or a homophobe, Fischberg said.

“He pushed us to think about what social justice truly means and why it is problematic when people hide behind euphemisms instead of engaging in debate,” he said.

And finally, the Heritage Foundation’s Mike Needham rounded off the speaker visits with a talk on how Washington is responsive to the desires of large interest groups like unions or big business, but not the needs of the public, Fischberg said.

Uncomfortable Learning wasn’t exactly embraced with open arms when Fischberg first sought official permission from administrators to launch the club in the winter of 2013.

Over time, as each talk attracted anywhere from 30 to 70 guests, the events starting to gain traction in the Williams community, and students and professors began to openly support the effort. Many people attended the talks and were interested to hear what the speakers had to say. The audience was often very opened minded, surprisingly so, the founders said.

“One of the things I liked about Uncomfortable Learning is it got professors and the administration to come out of the woodwork,” Fischberg said. “Professors would come up to me and say, ‘I think what you are doing is fantastic.’ I started hearing more and more of that.”

“We began to develop a motivated group of supporters who ignored criticism from certain groups at Williams,” he added. “Uncomfortable Learning had a successful trial run at Williams, and is well prepared to capitalize on our success next year.”

Fischberg graduated in May, and Hitchcock and Gaines, both 21 and seniors, said they have exciting plans to continue the effort this year at Williams.

In interviews with The College Fix, Hitchcock and Gaines said the continued goal of Uncomfortable Learning is not only to “ask the tough questions,” but to encourage their peers to do so as well.

As a new wave of freshmen come to into the “Purple Bubble,” that goal is vital, they said.

“What we hope is that Uncomfortable Learning plays a big role in defining a campus landscape that allows for open discourse and creates a marketplace of ideas,” Hitchcock said.

“It’s not that we are trying to push an ideology,” Gaines added. “Our goal is to bring speakers who will challenge campus norms.”

With that, both Republican, Democrat, libertarian and independent voices will be part of the 2014-15 lineup, they said.

It’s something that can be launched at any campus, and the trio who founded Uncomfortable Learning said their ultimate vision is that such clubs spring up at universities across the nation.

The speaker honorariums at Williams were supported by generous private funding, but that shouldn’t discourage students from trying. As a start, Hitchcock and Gaines said students should try to ask notable alumni at their schools to speak for free or speak if travel and lodgings are covered. They could also ask professors from their own schools with unpopular opinions to speak.

Fischberg said support is there for enterprising students.

“Students interested in creating a chapter of Uncomfortable Learning at their college should reach out to alums and foundations like the Charles Koch Foundation and Young Americans for Liberty,” he said.

It’s worth it, he added.

When Goldberg visited the campus in April, he subsequently wrote about his experiences at Williams:

All of this was against the backdrop of an outbreak of peak collegiate stupidity here at Williams. The school invited Michael Bloomberg to be a commencement speaker. This is hugely controversial on the left. A bunch of students and faculty are furious because Bloomberg supported stop-and-frisk policies in New York. Hence, these kids are passing around flyers comparing Bloomberg to a slave-holder or some such. One professor told me that perhaps as many as 150 members of the faculty might turn their back on Bloomberg on graduation day. And everywhere there is a lot of talk about how Williams is a “white supremacist” institution. Gotta love a thoroughly liberal liberal-arts college being called white supremacist by the very same black kids it admitted for an excellent four-year education. Dumbest. White. Supremacists. Ever.

But Fischberg said things have changed at Williams, for the better.

“The fact is we are now ready to talk about microaggressions and privilege in a way I haven’t heard in the last four years,” Fischberg said. “From my first three years at Williams, that didn’t exists.”

“Students were willing to have dialogues behind closed doors, but students have those conversations in open places now, where they are not stereotyped.”