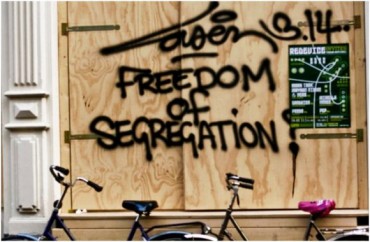 At universities nationwide, segregated spaces for students of color is becoming a more common and welcomed occurrence, seen in everything from housing and social gatherings to protests and grief sessions.

Most recently the trend could be seen in the wake of officer-involved shootings in Minnesota, Louisiana and Dallas this month, as at least two universities hosted campus meetings segregated by race to process the incidents.

Brown University’s “Center for Students of Color” hosted simultaneous “community care conversations” July 11 to “reflect, mourn the loss of life, and engage in self-care.” One was slated for “anyone who identifies as a person of color,” while the other was for everyone else, according to the Ivy League group’s Facebook page.

Similarly, UW-Madison’s Multicultural Student Center held meetings separated by race July 11. “The center held two distinct sets of ‘processing’ meet-ups. First, two ‘processing circles,’ one for white staff and another for non-white staff, were held in the morning, followed by racially separated ‘processing meet-ups’ for students in the evening,” the Daily Caller reported.

Likewise, in February, a “Concerned Town Hall” meeting was advertised to “black students and students of color” at the University of Missouri. White reporters who attended were asked to leave. Some did.

Social gatherings on various campuses have also been segregated by race in recent times.

As part of the University of New Mexico’s sex week events last fall, a “decolonized sex” workshop only permitted entrance to “self-identified women of color, including queer and trans,” according to the event’s Facebook page.

Also last fall, students at some of the Claremont Colleges held several gatherings meant only for students-of-color, including a “Hurting and Healing” art show, as well as a safe place event for “healing” and “self-preservation,” the Claremont Independent reported.

Coming this fall, segregated housing for students of color will also be on tap. The Berkeley Student Cooperative is debuting a “Person of Color Theme House.” It’s been billed as “the best way to meet the needs of students of color and low income students’ needs.”

And the University of Connecticut is rolling out a wing inside a new dorm building dedicated to housing black males. UConn administrators have downplayed the segregation aspect of the wing, emphasizing the new building will house students from all races, and the black males area will only take up a portion of one floor.