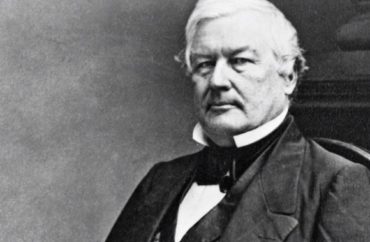 But one professor at the university openly disagrees with the decision, saying nation was better off because of Fillmore’s service as president, including black Americans

The University at Buffalo will be removing former U.S. President Millard Fillmore’s name from campus, citing “systemic racism” and his support of the Compromise of 1850.

Fillmore was the 13th president of the United States as well as founder and first chancellor of the University at Buffalo.

The Millard Fillmore Academic Center, which contains several academic departments, student dormitories, a theater, and other services, will now be referred to as simply the Academic Center. It will be renamed at a later date, according to UB’s Campus Planning Committee.

“#UBuffalo will remove the names Millard Fillmore, James O. Putnam and Peter B. Porter from four locations at UB, a decision that aligns with the university’s commitment to fight systemic racism and create a welcoming environment for all,” the university announced Monday.

#UBuffalo will remove the names Millard Fillmore, James O. Putnam and Peter B. Porter from four locations at UB, a decision that aligns with the university’s commitment to fight systemic racism and create a welcoming environment for all. ➡️ https://t.co/6ZbbzB7G3d pic.twitter.com/fxPH2SWCp0

The decision came in the wake of violent protests and rioting that have ravaged several major cities across the nation as University at Buffalo joins several other universities that are attempting to isolate themselves from prominent historical figures with “controversial” pasts.

Before ascending to the most powerful position in the country, Fillmore played an instrumental role in the founding of the University at Buffalo in 1846, and eventually served as its first chancellor until his death in 1874.

According to the University at Buffalo’s News Center, “UB understands Fillmore’s complex role in the history of slavery in the United States, which includes the Fugitive Slave Act, which Fillmore signed as part of the Compromise of 1850.”

“Clearly, historical namings on our campus—whether academic buildings, residential halls, interior spaces or thoroughfares—carry important symbolic value,” University President Satish Tipathi said Monday. “We want to ensure that these symbols align with our mission—namely, that we are a diverse, inclusive scholarly community.”

In an email to The College Fix, Campbell, one of the only openly conservative professors on campus, described the decision to remove Fillmore’s name as “terrible.”

“Most of all, the North was in a stronger position to win the Civil War and end slavery ten years later because of Fillmore’s support for the Compromise. None of this would have happened without Fillmore taking the stand he did. And how do we show our gratitude? It’s not right.”

In a memo to the university in defense of Fillmore, Campbell delineates the former president as “an anti-slavery pragmatist dedicated to the democratic process and the rule of law who sacrificed his political career in an effort to preserve the nation,” and someone the university should be proud of.

“UB should take the lead in explaining and correcting misunderstandings of Fillmore—not blindly following an ill-informed mob,” Campbell wrote.

In the summary of his memo, Campbell provides the university a quote from Fillmore himself as evidence against the claims of racism.

“God knows that I detest slavery, but it is an existing evil, for which we are not responsible, and we must endure it, till we can get rid of it without destroying the last hope of free government in the world.”

Fillmore died from a stroke in Buffalo, N.Y. He was laid to rest at Forest Lawn Cemetery—less than a 20-minute drive from UB’s North Campus.

In addition to Fillmore, the names of James Putnam and Peter Porter are also set to be stripped from the university.

Putnam was the university’s fourth chancellor and a New York state senator. According to the university, Putnam held openly racist views. As a result, Putnam’s Marketplace Eatery, located in the Student Union, has been renamed “Union Marketplace and Eatery.” Putnam Way, a road located on the North Campus, is being renamed, campus officials stated.

According to the Buffalo News, Porter was a Buffalo resident and a congressman who had owned five slaves—at a time where owning slaves was permissible. Porter Quadrangle, a student residence hall, is also in the process of being renamed.

All changes to the buildings’ entrances, campus signage, maps, and websites are expected to be completed before August 31, the first day of the fall semester.