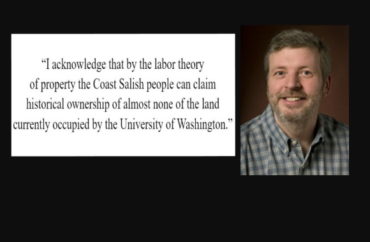 A professor at the University of Washington is the subject of controversy for riffing on a school-wide recommendation that professors put a native land acknowledgment in their syllabi.

“I acknowledge that by the labor theory of property the Coast Salish people can claim historical ownership of almost none of the land currently occupied by the University of Washington,” Reges wrote in his syllabus.

The University of Washington recommends that professors acknowledge in their syllabi that they are teaching on the ancestral lands of the Coast Salish people, a Native American tribe that lived in the northeastern part of the state.

The labor theory of property, a principle articulated by John Locke, argues “that you come to possess land by mixing your labor with the land (like growing crops there),” Reges said in a Jan. 7 email to The College Fix.

Reges refused to remove the passage unless all other faculty in the school removed theirs as well, he said.

I had the extreme displeasure of reading this "land acknowledgment" from a CS professor at my institution. pic.twitter.com/9csd52xqcH

“It is extremely important to me and other faculty in the Allen School that CSE 143, and all our classes, be inclusive environments. We have now updated the course syllabus to remove the statement,” wrote Magdalena Balazinska, director of the Allen School, in an apology email to Reges’ students, obtained by The College Fix.

Balazinska closed the email by assuring students that they “can expect to be treated fairly and respectfully in this class” and encouraged them to submit complaints to bias incident reporting channels if they are not.

“The statement Stuart Reges included in his syllabus was inappropriate, offensive and not relevant to the content of the course he teaches,” Balazinska wrote in a Jan. 7 email to The College Fix. “The invocation of Locke’s labor theory of property dehumanizes and demeans Indigenous people and is contrary to the long-standing relationship and respect the UW has with and for the Coast Salish peoples and the federally recognized tribes within the state of Washington.”

“The Allen School and the UW reserve the right to amend academic materials in this way,” she continued, “as the syllabus for an intro to computer programming course is not the appropriate place or manner for a debate about land acknowledgements.”

“Reges can and has expressed personal views with which the Allen School and the UW profoundly disagree on other platforms.”

Neither the university nor the Allen School requires professors to include a land acknowledgment, she added.

The College Fix also reached out to the university’s media relations department, which deferred to Balazinska’s statement on Jan. 10.

“I’m surprised that they have reacted so strongly to this,” Reges said in his email to The College Fix. “They don’t see this as a simple disagreement. There is almost a religious aspect to it, as if I am guilty of blasphemy. They have said that disagreeing with their theory that the university sits on ‘occupied land’ is offensive.”

“I think they’re overreacting,” he added.

The Foundation for Individual Rights in Education sent a Jan. 11 letter to the University of Washington requesting that they allow professors to use the university’s own land acknowledgment or craft their own, should they address the issue in their syllabi.

“The university has censored his syllabus by removing his modified land acknowledgment requirement, and created a shadow course to compete with his section. This course of conduct is retaliation in response to Reges’s views on land acknowledgments, in violation of the First Amendment,” wrote FIRE Senior Program Officer Zach Greenberg, who authored the letter, in a Jan. 12 email to The College Fix.

Universities may not force faculty to adhere to their viewpoints on political issues like acknowledgments, nor may they “censor” syllabi or other academic materials, Greenberg added.

Both Greenberg’s letter and statement to The College Fix claim that University of Washington faculty are required to include a land acknowledgment in their syllabi, but Balazinska and Reges told The College Fix that it is a recommendation.

Reges is still teaching the course, though the university did open another section of the course with a different instructor.

In April 2021, a member of the university’s student government used Reges’s right-of-center beliefs as a justification for a proposed bill that would create a system of student juries to resolve students’ complaints of discrimination by professors.