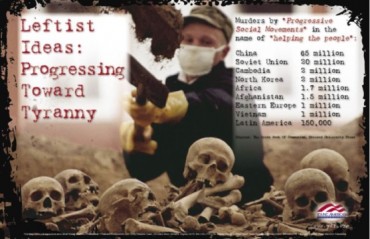 A poster meant to illustrate the number of individuals who have been murdered by collectivist governments was deemed too harsh by officials at Duquesne University, which disallowed the image from hanging on campus.

The poster, which featured a picture of human skulls and bones, the number of people murdered by leaders of various “progressive social movements” – nearly 100 million people – and the phrase “Leftist Ideas: Progressing Toward Tyranny,” was apparently “too off-putting,” sophomore Bridget Seelinger, 20, said she was told.

On Monday, Nov. 18, she met with a campus administrator who told her the skulls poster was too upsetting to allow to hang in the school’s largest dorm, she said in an interview with The College Fix.

“I am upset about the censorship,” said Seelinger, a nursing major at the private, Catholic institution in Pittsburg. “I understand if it was racist or included death threats, but something like that is virtually harmless. I don’t understand why anyone had a problem with it, and why skulls are so scary.” University officials did not respond to a request by The College Fix for comment on Wednesday.

Seelinger, president of the College Republicans at the university, said the posters were provided by Young America’s Foundation for its “Freedom Week” campaign, which aims to recognize the Nov. 9 anniversary of the fall of the Berlin Wall, as well as Veterans Day. In addition to the posters, high school and college students across the country also undertake other projects as part of the commemoration, such as build and then tear down a mock Berlin Wall.

The skulls poster was one of three created for the Freedom Week observance.

“The goal of the (skulls) poster is to underscore the number of individuals who have been murdered by collectivist governments,” Coyle stated in an email. “Sometimes, the truth hurts. There are professors and administrators on our campuses who still embrace collectivist ideas, and it shocks them when we point out how many have fallen victim to their ideas.”

Seelinger, in writing about her experience on Young America’s Foundation website, adds “when campus administrators use their own personal view to determine which ideas students should encounter, it does a disservice to everyone on campus.”