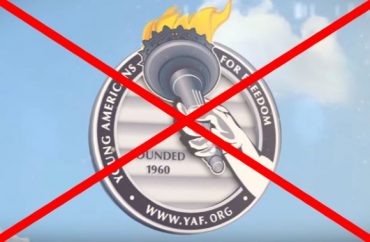 Club rejected for the third time

For the Young America’s Foundation chapter at Santa Clara University, the third time was not the charm.

The administration at the Jesuit school dealt another blow to the conservative student group when a vice provost rejected its appeal of the student government’s two refusals to recognize the chapter, YAF said Friday.

By finding that YAF did not face discrimination for its political views, in spite of remarks by student senators, the university appears to be ignoring its own lawyer.

The minutes from the student government’s March 7 meeting show that Bridget Colbert, interim general counsel, warned senators that California law prohibits even private universities from refusing to recognize clubs based on their speech.

In a phone interview with The College Fix Friday, Adam Steinbaugh of the Foundation for Individual Rights in Education said he was “surprised” by the administration’s decision.

“It is difficult to fathom what they see here that is not related to viewpoint discrimination,” Steinbaugh said. “It’s very apparent that they voted against the organization due to ideological objection to their views.”

YAF at Santa Clara had sought approval from the student government in April and again in May, but were rebuffed both times.

During the March 7 meeting, where the issue was debated, Colbert made clear that denying recognition to a club that had met “the minimum requirement” would amount to punishment for its views.

Senator Kayla Williams told the lawyer that the student government has to “address students concerns, especially since there are students who have an issue with the nature of certain clubs,” according to the minutes. (No student club is named in the minutes.)

Colbert responded that the only exception is if a club’s “mission is to insight [incite] violence or threats of harm.” (The minutes are plagued by misspellings.) “If they are causing harm, then you can choose not to, but if its [sic] ideological it is not a reason to not certify,” she said.

Senator David Warne asked her to specify harm and violence, and whether “mental harm” counts. The minutes recount Colbert’s response: “Physical harm and violence only based on 1st amendments rights,” again referring to the Leonard Law.

Colbert went even further, telling senators they couldn’t reject a club based on the actions of their national organization. Senator ​Shivani Gohil had mentioned that a member of Students for Justice in Palestine was identified “on a terrorism website that the Israeli group knew about,” but the minutes don’t provide any other context.

The lawyer told another senator, Sahil Sagar, that clubs should be “automatically” recognized unless “there is strong reason to not automatically certify … If they meet the minimum requirements and their mission isn’t to impose harm, then you should pass them.”

Senator ​Hiwad Haider asked whether there was “still value” of allowing “input” from campus constituencies into club approval. Colbert responded that input based on “viewpoint” was “too far.”

Colbert’s warning went unheeded by the student government in its April and May votes, with multiple senators citing YAF’s views on illegal immigration and the threat of its “presence” to minority students.

One of them, Raul Orellana, even faulted YAF’s practice of “sharing inspiring stories with legal immigrants.” He said YAF speaker Ben Shapiro, the pundit and radio host, “has been known to spew Hate Speech,” which should override the Leonard Law.

Haider went so far as to say that if Shapiro came to campus, he wouldn’t want to attend SCU anymore.

The rejections prompted YAF to seek an override from the administration, based on viewpoint discrimination by the student government, but received the news on Thursday that it had been rejected.

In her letter to the club, Vice Provost Jeanne Rosenberger said that she had “reviewed the record” and had determined “that the record is insufficient to establish that the denial of recognition was based on YAF’s political opinion.”

The club has sought recognition in order to be able to reserve rooms, invite outside speakers and obtain funding from student activity fees.

“Conservative students at Santa Clara are being silenced by leftist students and administrators who are too scared to allow differing viewpoints at the one place where intellectual debate and discussion should be most valued- the college campus,” YAF said.

FIRE’s Steinbaugh, who directs its individual rights defense program, said his group would have to talk to the students involved before deciding what the next step would be.

FIRE is “disappointed with this response and we think it falls short of the university’s commitment to freedom of expression,” he said.

YAF spokesman Spencer Brown had not responded to a Fix query.