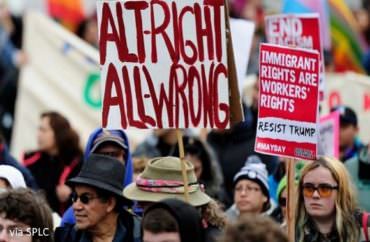 After the white nationalist rally in Charlottesville, the University of Minnesota recommended to students a detailed brochure authored by the Southern Poverty Law Center on who the alt-right are and how to counter them.

While the SPLC reportedly sent the brochure to 2,000 campuses, the University of Minnesota took up the mantle to help officially spread its message.

When asked if they have an alt-right problem on campus, University of Minnesota representative Steven Henneberry told The College Fix via email that “the University, like our peers nationwide, continues to closely follow this emerging issue.”

Alexander Hines, director of diversity, equity and access programs, had given the school’s official response to Charlottesville, saying in a campuswide announcement that “as educators and students, we have the responsibility to learn about the historical and cultural context of genocide and colonization that has maintained and upheld a superiority and inferiority binary as well as a power structure of economic oppression that has also maintained systemic, structural, and institutional racism under the guise of ‘We The People.’”

As for the brochure, titled “The Alt-Right on Campus: What Students Need To Know,” it defines the group as people with “the idea that America should be a country for white people.”

In the section “what to say, what to do,” it advises anti-alt-right students to attend meetings of campus groups that attempt to bring an alt-right speaker and question their motives, offering stories from students of color who would feel hurt if they came to speak.

“Denying an alt-right speaker of such a spectacle is the worst insult they can endure,” the brochure states, adding that counter protesters should “organize a joyful protest away from the event,” avoiding confrontation with the Alt-Right at all costs.

The brochure goes on label groups such as Gavin McInnes’s “Proud Boys” as an alt-right fight club, despite having publicly denounced the alt-right.