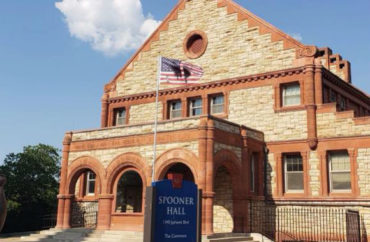 A defaced American flag flown as a work of art didn’t last long at the University of Kansas, drawing condemnation from KU students as well as Republican politicians.

The taxpayer-funded institution took down Untitled (Flag 2) from The Commons at Spooner Hall in the name of “public safety,” though it will remain in the Spencer Museum of Art on campus.

The work was commissioned by Creative Time, a New York City-based organization dedicated to commissioning “ambitious public art projects” (below). German artist Josephine Meckseper describes the work as a representation of the “deeply polarized” state of the country.

A First Amendment watchdog told The College Fix Thursday it’s sending KU a formal letter of concern sometime Friday for bending to the prevailing political winds in the conservative state.

KU media relations did not respond to multiple inquiries from The Fix regarding the process of approving works of art on campus, its decision to remove the display and the specifics of the public safety concern from the flag’s display.

Don’t remove it – ‘thank a soldier’

It’s not clear how long the flag has been up at KU. The Fix first learned about it from a KU student Tuesday night.

“This is absolutely abhorrent,” Victoria Snitsar, who also serves as communications director for Republican congressional candidate Steve Watkins, wrote on Facebook. She called on the university to apologize for “flying a defaced American flag under the pretext of calling it ‘art’ and for violating U.S flag code” on public property. Snitsar did not respond to a Fix query Thursday.

The KU College Republicans released a statement less than 15 minutes after Snitsar, calling the display “disgusting” and asking “who approved and authorized this display.”

Snitsar’s boss Watkins, a combat veteran, weighed in a few hours later by saying “it hurts me” to see the university fly a defaced flag. But he didn’t ask for its removal: “I have no demands of the artist, university administration, or students, other than this — thank a soldier.” Watkins later reiterated to the Lawrence Journal-World that he wasn’t asking for the display’s removal.

Another KU student, Ian Ballinger, told The Daily Caller News Foundation that administrators told him the display was put up July 4.

Creative Time’s page for Meckseper’s work says it will be displayed July 3-31 at 13 sites across America, including KU, Cornell University, Rhode Island School of Design, University of South Florida and Rutgers University.

Meckseper, who specializes in “dripped paintings,” divided the drippings on the flag to represent the political division in a country whose “president has openly bragged about harassing women and is withdrawing from the Kyoto protocol and UN Human Rights Council,” the artist said on the flag page.

The striped sock featured in the bottom corner of the flag has come to stand for the “imprisonment of immigrant children at the border,” she said, adding that “native cultures … took care” of the Americas “much better for thousands of years before us.” The Fix was unable to find a contact for Meckseper to seek her comment on the controversy.

The series was “conceived in response to the current political climate” and will feature sixteen flags by various artists, according to Creative Time. Its artistic director said the flags create “a space to resist.”

The Spencer Museum did not respond to phone and email inquiries from The Fix regarding its decision to participate in “Pledges of Allegiance” or if the museum will continue to participate.

One person called in threat of ‘intimidation and harassment’

KU didn’t mention political pressure when Chancellor Douglas Girod announced Wednesday that the display would be relocated inside the Spencer Museum.

That afternoon, Kansas Gov. Jeff Colyer demanded the defaced flag be “taken down immediately.” He said he had contacted Girod and the president of the Board of Regents to convey that the “disrespectful display of a desecrated American flag on the KU campus is absolutely unacceptable.”

The same day, Colyer ordered 19 extra flags be flown outside the Kansas statehouse in response to the controversial display at KU, according to the Associated Press.

Meanwhile at the State Capitol we fly the flag proudly. #ksleg pic.twitter.com/WLIpTuWXyg

Instead, Chancellor Girod said the discussion about the flag Wednesday “has generated public safety concerns for our campus community.” He expressed his wish to “foster dialogue” through the display, but “we cannot allow that dialogue to put our people or property in harm’s way.”

Girod did not respond to email inquiries from The Fix Thursday regarding the public safety concerns in his statement. But the Journal-World reported Wednesday that the Office of Public Safety and KU media relations were dodging its requests for details on the nature of the safety concerns.

The newspaper reported Thursday that the campus police department’s crime log showed that police took a report of a phone-based threat stemming from the display early afternoon Wednesday. It was categorized at “intimidation and harassment.” According to the Journal-World, the flag came down shortly before 4:30 p.m. Wednesday.

Gov. Colyer’s rival for the Republican nomination for governor, Secretary of State Kris Kobach, also called for the removal of the display and criticized Colyer for approving the relocation of the flag to the campus museum. “It is ridiculous to call that a solution,” Kobach said, according to the Associated Press.

The Foundation for Individual Rights in Education urged the university Wednesday to “take a strong stand for the First Amendment” and not remove the flag, shortly before Chancellor Girod’s statement on “public safety.”

Vice President of Programs Peter Bonilla wrote that the right to free speech “doesn’t exist to protect politically popular speech” but speech “likeliest to stir controversy, and it is a crucial check against the power of the state to silence dissenting voices.” He noted FIRE released a report Tuesday on campus censorship of artistic freedom.

According to Bonilla, Creative Time told the civil-liberties group that Meckseper’s (below) piece was meant to “generate dialogue” and “bring attention to pressing issues of the day.”

The art organization told FIRE it was “proud to stand by artists who express themselves. Today’s events illustrate the same divisions in our country that the series has confronted head-on.”

Bonilla told The Fix Thursday to look for a letter from FIRE to the university the first half of Friday.

UPDATE: The headline has been changed.