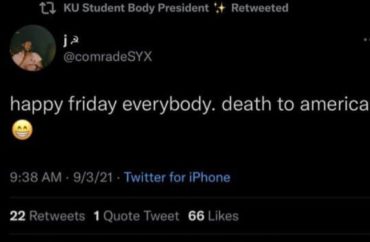 The University of Kansas student body president has no plans to apologize for sharing a “Death to America” tweet.

The student senate Twitter account and the @KUPresident account both retweeted a September 3 post that said “happy friday everybody. death to america” with a laughing emoji. She shared a different tweet after that that said “The more you read American history, the more the whole “Death to America” line sounds less like a terrifying, chaotic sentiment, and more like a perfectly rational, if anything remarkably reserved, statement.”

The student senate did not respond to a September 8 request for comment.

President Niya McAdoo told The College Fix that there will be a meeting next week about the social media posts.

“[W]e will be having a full senate meeting next week on Wednesday that will live stream to our YouTube,” McAdoo told The Fix via email. “Follow up on the re-tweet and the situation as a whole will be answered there! Thank you for reaching out,” McAdoo said, and included a smiling emoji at the end of her email.

McAdoo has continued to defend her statements on Twitter.

“Please know that it is death to an America that was built on Indigenous genocide and the backs of Black slaves,” she said in response to a tweet from conservative commentator Todd Starnes. “If you’re worried about people in the service of the military, be mad at your government because my words shouldn’t make you this mad.”

Please know that it is death to an America that was built on Indigenous genocide and the backs of Black slaves. If you’re worried about people in the service of the military, be mad at your government because my words shouldn’t make you this mad. https://t.co/EpUDQlgcup

The university has no plans to investigate McAdoo for her comments.

“We are aware of social media activity by our Student Body President that has caught the attention of some members of the KU community,” a public affairs staffer said in an email to The College Fix. “The opinions in the student’s post are protected by the First Amendment. In addition, KU is committed to its role as a marketplace of ideas – including ideas that some individuals find offensive.”

However, it said it wants offended individuals to know that the university “strongly disagree[s] with the sentiment of her post, and she does not speak for the university on this or any other matter.” 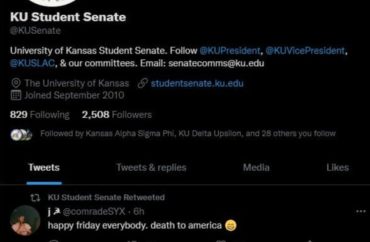 “Any person looking at a tweet from KU official accounts is going to feel they are approved and representative statements of the student body,” student Ashley Sherrow told The Fix on Facebook.

Sherrow said that she was “offended and disappointed.”

Sherrow, the daughter of a veteran, said McAdoo retweeting the “Death to America” tweet was “unprecedented” “insensitive” and “tone deaf.”

“As a former student of KU I am deeply concerned at the liberties the KU Student Body President is taking with KU official Twitter accounts,” Isabelle Miller told The College Fix via Facebook messaging.

“Not only has she retweeted death to America but she continues to defend the use of the Student Body President’s official Twitter page like her personal one,” Miller said.

A supporter of the First Amendment, Izabella states that she “completely respects Ms. McAdoo’s and any individual’s right to tweet what she did,” but using KU’s “affiliated and approved account is where I think the line should be drawn.” She says this is unprofessional and biased.

Miller said that the comments, coming just a few days after 13 troops died in Afghanistan, sent the wrong message.