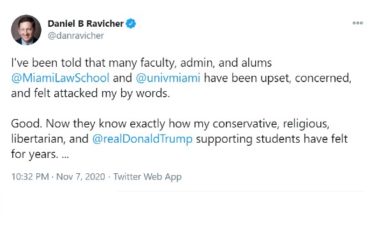 Some students at the University of Miami are upset at a law professor for his tweets in support of President Trump and his comments on the voting habits of black and Latino voters.

On election night, Professor Daniel Ravicher tweeted: “Latinos are now clearly the most politically important minority group in America. Blacks allow themselves to be taken for granted and treated horribly by Democrats. Latinos don’t. Also, population difference will grow bc blacks have 50% more abortions than Latinos per cap.”

The night before the election he tweeted: “Heading to @Walmart to get what I need to protect my family from ‘peaceful protesters’ who can’t accept the result of an election.”

Heading to @Walmart to get what I need to protect my family from "peaceful protesters" who can't accept the result of an election.#SecondAmendment #StandYourGround

Students criticized Ravicher for these tweets and others that discussed voting patterns and the results of the election.

“He [Professor Ravicher] seems extremely racist, radical and dangerous and, at the very least, he follows others on social media who most would consider unhinged and extremist in their views,” student Raven Bedford, a black undergraduate student, told the campus paper The Miami Hurricane.

Ravicher’s statements “have violent and racist undertones” and “I don’t feel or welcome on a campus where professors advocate for my dehumanization on Twitter,” Bedford said.

The campus paper reported some members of the student bar association are drafting a letter to the dean of the law school.

We cannot seek to silence everyone just because we disagree with them. That said, our professors are leaders who set the standard for our students.

If our law school’s goal is to truly be inclusive and to make students feel comfortable, how can we continue to write checks to a professor who thinks that all Black people are simply people who allow themselves to be victimized, as the professor’s tweets say.

The campus paper did not say if Pasciak himself is participating in the letter to the dean.

Anthony Varona, dean of the law school, did not respond to an emailed request for comment from The College Fix on Monday.

“I don’t think I’m expressing outrage, but [the students] are entitled to their opinion,” Ravicher told The Fix via Twitter. He would not say if the school had reached out to him about his tweets or if he was under investigation for his comments.

Ravicher wrote on Twitter that some people were calling for his removal.

“To the students who have spoken out against me and called for my removal, I applaud and support you,” Ravicher tweeted on November 8. “Every student should feel empowered to criticize faculty,” the professor said.

To the students who have spoken out against me and called for my removal, I applaud and support you. Every student should feel empowered to criticize faculty. I have and will defend your right to do so of me. Live in your truth and do what you believe is right.

The University of Miami law school did not respond to multiple emailed requests for comment from The Fix in the past several days on if there is any investigation or action planned against Ravicher.

Other students have launched an effort in support of him.

The campus Republican Law Student Association launched a Change.org petition in support of Ravicher which has garnered almost 300 signatures.

“Nobody’s political views should be used against them in a job, especially not an academic job,” the petition said.

Diversity of thought is critical in an educational institution, which is said to be a melting pot of ideas. We must ensure that the University of Miami School of Law does not take action against Professor Ravicher strictly on the basis of his political views. Professor Ravicher is a voice for students on the law school campus who often feel voiceless. He is not only a well-respected attorney, but also a man of great character.

“We were disappointed to hear of the recent news regarding Professor Dan Ravicher, who many of us are privileged to have as both an advisor and professor,” the conservative student group told The Fix via email.

I've been told that many faculty, admin, and alums @MiamiLawSchool and @univmiami have been upset, concerned, and felt attacked my by words.

Good. Now they know exactly how my conservative, religious, libertarian, and @realDonaldTrump supporting students have felt for years. …

It told The Fix its members wanted to “demonstrate the widespread support for Professor Ravicher, from individuals on both sides of the political spectrum.”

“This support wasn’t strictly from law students. Rather, it was from alumni, fellow attorneys, and residents of the local community,” the group said.

The Hurricane reported that Ravicher plans to “join President Trump’s legal team to fight his case in the Supreme Court regarding this presidential election” and believes he will soon be out of a job at the law school, although he has not been fired.