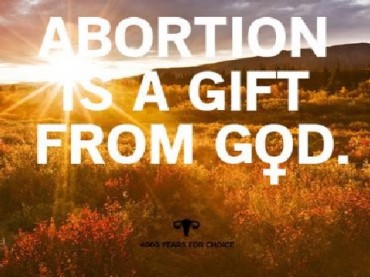 Abortion – the “life-sustaining act” of the ages.

That’s the theme behind an exhibit currently on display at the University of Michigan dedicated to defending and glamorizing the history of abortion.

“4000 Years for Choice is an exhibition of posters about the age-old practices of abortion and contraception as a means to reclaim reproductive freedom as a deeply personal and life-sustaining act existing throughout all of human history,” states a university webpage describing the exhibit.

The exhibit will be showcased through May 29 in the main lobby of the Lane Hall women’s studies building on campus. The exhibit consists of dozens of brightly colored posters with bold words, phrases and documentation meant to highlight and celebrate all the ways in which women over the millennia have performed abortions.

As for the exhibit’s posters, one offers an ancient text with an abortifacient recipe: “In 3000 BCE, ancient Egyptians contained a contraceptive recipe numbered Prescription Number 21. It was called Recipe Not To Become Pregnant and called for crocodile feces, mixed with fermented dough, and placed in the vagina.”

Similarly, another touts: “Soranus, an ancient Greek physician and medical writer, wrote about the silphium plant. He suggested that women drink the juice once a month because it not only prevents conception but also destroys anything existing.” The “Cheer Casanova” poster touts the infamous womanizer for never having children because he used condoms. “Empower the Douche” denotes what some women at the turn of the century did to try and prevent pregnancy.  And “Rejoice Fumigation” describes how “women have been fumigating their vaginas with contraceptive vapors for thousands of years.”

The exhibit has been described by feminist art exhibit reviewers as “bold, beautiful statements to celebrate choice,” with “fresh, vital strategies and tactics for those committed to social change.”

The images were created by Heather Ault, whom a University of Michigan webpage says is “a visual artist, pro-choice activist, and independent scholar creating artwork to shift conversations about reproductive rights and justice.”

“Her work has been exhibited throughout the country. In 2011 she won the Vision Award from the Abortion Care Network for her innovative work.”

Ault declined to comment to The College Fix for an interview on her art exhibit.

“Without knowledge of this history, we as Americans cannot fully understand women’s deeply ingrained desire to control pregnancies for the good of ourselves, our relationships, and our families,” Ault explains online.

Although not on display, Ault is also the creative mind behind the 4000 Years for Choice corresponding “reproductive roots note cards,” which offer phrases and quotes from various pro-choice activists against colorful backdrops; expressions such as: “Abortion is a gift from God,” “Abortion is a blessing” and “anything 46 million women do every year can’t be immoral.” One notecard quotes Merle Hoffman at saying: “The act of abortion positions women at their most powerful…” Another quotes Soraya Chemaly: “ ‘Personhood’ for zygotes cruelly subverts the very idea of a culture of life and potentially criminalizes every pregnant woman.”

As for the display on campus, it is sponsored in part by the publicly funded Program for Sexual Rights and Reproductive Justice, an arm of the University of Michigan’s department of obstetrics and gynecology.

Inquiries by The College Fix into whether the Center for Sexual Rights and Reproductive Justice has an official position on the pro-choice vs. pro-life controversy, and whether an alternative viewpoint will also be addressed on campus, were met with referrals to the local Planned Parenthood.

Yet Ault’s website states that “anti-choice” comments add to the richness of the conversation and sharpen critical thinking skills.