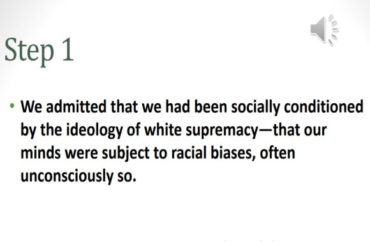 The University of Minnesota’s School of Social Work hosted a virtual lecture recently that aimed to teach white people about their white supremacy and how to counteract it by using a “12 step” program mirrored after the one used by people in Alcoholics Anonymous.

Combs is a University of Minnesota alumnus who created the white supremacy 12 step program “after years of struggling to navigate the role and presence of whiteness in her personal, academic, and professional journeys,” according to the university’s website.

Combs said her program helps people recover from their whiteness.

“I also want to hold that alongside the tension that, in this model, we are, in fact, centering whiteness, but we are centering it differently: to expose it, study its patterns, and to transform its violent legacy,” she said.

Combs began the lecture by acknowledging that “I am on traditional Dakota land,” the territory of a Native American tribe which settled in Minnesota. She also acknowledged “George Floyd, Breonna Taylor, and all of the other lives stolen from families and communities and our world due to police brutality and state-sanctioned violence.”

She then talked about the goal of the lecture: to “decenter whiteness.”

Combs asked attendees: “What comes to mind when you hear the term ‘white supremacy?’”

As an answer to the question, she displayed a slide titled “The face of white supremacy.” Under the title were pictures of Ku Klux Klan members as well as white nationalists in Charlottesville. She then took those images off and put a picture of her own face on the screen.

“When BIPOC activists would use the term ‘white supremacy’ to talk about the systems that needed to change and the work that white people needed to do, my instinct was to recoil. It felt like too hard or too raw of a word, and I didn’t like it. And I ultimately realized that that is my ego,” she said.

“Stepping into that tension and accepting my connection to white supremacy has been a freedom of sorts to show up in better alignment with my values and do the work for the rest of my life.”

Before diving into her 12-step model, Combs prefaced it by quoting feminist author Bell Hooks in saying that “‘imperialist white supremacist capitalist patriarchy’ [is] the power structure underlying the social order.”

Nevertheless, Combs said, “It is sometimes necessary to focus singularly on race,” before beginning her summary of the 12 steps.

Step 1: “We admitted that we had been socially conditioned by the ideology of white supremacy.”

“We have been socially conditioned. [White supremacy] is in us. It will always be here. We will always have to work against it in this journey of transformation,” she said.

Step 2: “We came to believe that we could embrace our ignorance as an invitation to learn.”

Combs decried the fact that people make statements like: “I don’t understand why Black Lives Matter has to protest on the highway.”

“If, however, a white person says, ‘I don’t have lived experience that informs me of a risk so great that I would put my body on the line…I have so much I need to learn. I wonder where I can go and seek that knowledge.’ The route is the same: the ignorance, the things that we don’t know,” she said.

Step 3: “We develop support systems to keep us engaged in this work.”

“Far too often people rush in [to the work of social justice], make a mistake, and then turn away. Our commitment is to build support systems and practices that keep us coming back to our core humanity and then showing up in a spirit of accountability and solidarity forward,” Combs said.

Step 4: “We journeyed boldly inward, exploring and acknowledging ways in which white supremacist teachings have been integrated into our minds and spirits.”

Combs displayed a worksheet for people to fill out in order to examine how “white supremacy has negatively impacted” topics like “My Understanding of History, My Social Network, How I Interact with People of Color, and (Micro)aggressions I Perpetrate.”

According to Combs, the prefix in “(micro)aggressions” is in parentheses due to the fact that “I am done calling them ‘micro,’ because they hurt.”

Step 5: “We confessed our mistakes and failings to ourselves and others.”

“We know that we are gonna make mistakes, and so Step 5 is about coming back and sharing that and learning the lessons and sharing them with others,” Combs said.

Step 6: “We were entirely ready to deconstruct previous ways of knowing, as they have been developed through the lens of white supremacy.”

Combs displayed a meme of Morpheus from The Matrix saying, “What if I told you it’s ok to change your opinion based on new information.” According to Combs, “Step 6 is really about just acknowledging and sitting with that.”

Step 7: “We humbly explored new ways of understanding…proactively seeking out new learning and reconstructing a more inclusive sense of reality.”

Combs displayed a list of authors who can help with this step, including Audre Lorde, Chimamanda Adichie, and Ta-Nehisi Coates.

Step 8: “We committed ourselves to ongoing study of our racial biases, conscious or unconscious, and our maladaptive patterns of white supremacist thinking.”

According to Combs, many members call this step “the slimy step.”

However, Combs said, that slime — people’s unconscious biases — are necessary to face. She quoted James Baldwin in saying, “Not everything that is faced can be changed, but nothing can be changed until it is faced.”

She compared this process to tracking the “automatic negative thoughts” of people who are struggling with depression.

Step 9: “We develop strategies to counteract our racial biases.”

In this step, Combs talked about thinking about people of color positively.

She said that one of her members, when she sees black people out in public, will repeat out loud to herself, “Hello my brother, Hello my sister, Hello my sibling.” This repetition, she said, is private and non-disruptive to those around her.

Step 10: “We embraced the responsibility of focusing on our impact, more than our intentions, in interactions with people of color.”

Combs included a passage from Ken Hardy called “Intentions: Province of the Privileged.”

She said that it is unacceptable that “[white people] want to sit and clarify that we didn’t mean it and someone else misunderstood while our BIPOC [black, indigenous, and people of color] siblings are living with the impact.”

Step 11: “We engage in daily practices of self-reflection.”

“Forever and always, for the rest of our lives, we can notice and study where our issues are and how we’re gonna be more courageous the next day,” Combs said of this step.

Step 12: “We committed ourselves to sharing this message with our white brothers, sisters, and siblings…in order to build a supportive recovery community and to encourage personal accountability within our culture.”

“Step 12 is about saying, ‘We have to go and get our people and work on our communal transformation,” Combs said. She encouraged attendees to ask themselves: “Who are your heroes? What are your songs, traditions, rituals, rules of admonishment?”

After she finished talking about the 12 steps, Combs revealed the outline of what a gathering of those looking for a “Recovery from White Conditioning” meeting would look like.

Meetings start with a “Call to Recovery,” a quote from author Shailja Patel: “We are here to be fully human to ourselves, fully accountable to each other.”

After house-keeping concerns like introductions and announcements, attendees will undergo a minute of silent reflection, read about “a white anti-racist, then discuss the particular step they are focusing on in that meeting,” she said.