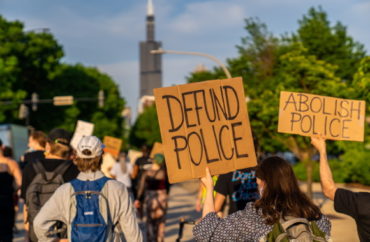 University said the vote is ‘advisory only’

Students at the University of Illinois at Urbana-Champaign voted during a spring referendum to cut 25 percent of the campus police budget.

But university officials said they have no plans to implement the cuts, which would amount to a $2 million cut to the police department that not only patrols campus, but also investigates sexual assaults and handles legal compliance of crime reporting.

During the spring student government elections, nearly 80 percent of voters voted to tell the university to cut campus police funding by 25 percent.

“Student referenda are advisory only,” Robin Kaler, the public university’s associate chancellor for public affairs, told The College Fix in an email. The Fix had asked the university about how it planned to implement the cut.

When asked to confirm if that meant the university would not implement a 25 percent cut, Kaler said that was “correct.”

“We are always reviewing how we invest in safety, wellness and mental health services for our university community,” Kaler said, when asked in a follow-up email if any of the cut would be implemented.

“For example, we recently implemented the C.O.A.S.T. and R.E.A.C.H. programs in our Division of Public Safety and added a director of Community Development and Engagement,” the spokesperson said.

“This referendum was propagated by Defund UIPD, an organization on campus that dedicates its efforts to pushing the redistribution of money from UIPD to the local community and campus necessities,” The Daily Illini, the student paper, reported in March.

Defund UIPD did not respond to an email on May 20 from The College Fix seeking a reaction to the university’s decision not to cut police funding and how it would have wanted to see the cut implemented.

Voters were asked if university officials should “reallocate 25% of funding from the University of Illinois Police Department toward resources for students, workers, and community members via a participatory budgeting process.”

The Big Ten university said that more than 80 percent of the police budget goes to personnel.

“[W]e’d be looking at a clear reduction in services (including) our patrol units, community outreach, crime prevention education and sexual violence resources,” spokesperson Patrick Wade said, according to the Daily Illini.

The campus police department shared The Fix’s inquiry on how the cuts would be implemented with Wade, who referred the email to the public affairs department.

“We do not have the authority to make decisions regarding the campus budget for policing or public safety matters,” Margareth Etienne, a co-chair of the working group, told The College Fix via email on April 28. “That said, we will be in a position to deliver a report to our chancellor regarding public safety recommendations.”

Etienne did not have any additional updates on the conversations on the police cuts when asked on May 20.