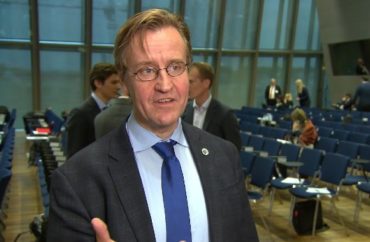 The University of Chicago has confirmed that criticizing the mantra “defund the police” does not violate its policy on harassment, discrimination, and sexual misconduct.

Ten days after it removed a professor from editing a prestigious economics journal because of his new and old tweets – which were well within the mainstream of American political views even before the Trump administration – the private university concluded that Harald Uhlig (above) did not engage in “discriminatory conduct on the basis of race in a University classroom.”

The announcement was posted Monday afternoon on the blog of the economics department, which Uhlig formerly chaired:

The review concluded that at this time there is not a basis for a further investigation or disciplinary proceeding. … In light of this outcome, the Journal of Political Economy has returned the faculty member to his role as journal editor.

The luminaries of American economics – Janet Yellen, Paul Krugman and surfer dude Justin Wolfers – came out against Uhlig for sounding like a centrist Democrat.

He had mocked the idea of defunding police, comparing it to belief in creationism, and said Black Lives Matter had lost its credibility by endorsing the concept. Three years ago he had asked defenders of kneeling NFL players how they’d feel about players’ political expression on the field if some athletes chose to wear Ku Klux Klan garb.

Most troubling, the Federal Reserve Bank of Chicago fired him as a consultant for violating its “values and our commitment to diversity, equity, and inclusion” – by expressing views that are more liberal than Joe Biden’s during the Obama administration.

A review of Twitter Monday night revealed many academics unhappy that less-than-woke comments are not (yet) grounds for discipline at perhaps the biggest defender of free speech in American academia.

Leave it toca White economist like @haralduhlig to BENEFIT from openly speaking in a discriminatory way against blacks and those working for a better future! He is gallivanting about the media coverage of his comments! Ugh!

Freedom of speech protectors can rest easy because Harald Uhlig is well protected both as a professor and a powerful editor for making racist remarks toward his students of color. https://t.co/OlJKVCZjlB

Harald Uhlig has been reinstated as editor for @JPolEcon. University of Chicago completed investigation with what appears to be no disciplinary action taken. This is very disappointing and, sadly, entirely expected.https://t.co/Xd0UaqaDIV

One even found a way to claim collective victimhood in the fact that Uhlig gets to keep his job.

many people risked their careers to come out with stories of harald uhlig's racism and now that the academy has protected him i'm not excited to see what happens to those that exposed him https://t.co/Nhz6EyGZo9

Many tweets suggest Uhlig said racist things in class – seemingly the only basis for a university investigation – but the most prominent accusation from a former student was simply that the German-born Uhlig had mocked Martin Luther King Jr. Day six years ago.

Economists angered by Uhlig’s exoneration may simply boycott his journal as a method of getting him booted permanently.

At this time there is not a basis for me to have confidence in the editorial process at @JPolEcon.

So I am not going to submit my papers there. https://t.co/PhORIwbmqh

It feels cheap for me to say the same given I’ve never submitted to @JPolEcon in the past, but I now don’t plan to in the future either for whatever that is worth. https://t.co/DVvZh4VskG

Two things seem clear: Uhlig’s career is not safe, and it’s only a matter of time before the University of Chicago gets tired of fighting off the woke mob, notwithstanding its “green light” rating.