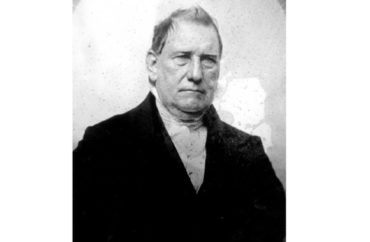 Next up: Cincinnati Reds owner?

The second-largest university in Ohio removed the name of its founding donor from its College of Arts and Sciences last week – and may do the same to other parts of campus .

The University of Cincinnati is following through on the student government’s vote last year to remove Charles McMicken’s name because he had owned slaves and advocated for racial segregation.

The resolution prompted President Neville Pinto to designate a university-wide working group in January to explore and examine McMicken’s “historical affiliation” with the liberal arts college that long bore his name.

The working group finalized its 44-page report last month. One of its major suggestions was the removal of McMicken’s name, and Pinto agreed. The public university announced Tuesday that its Board of Trustees unanimously redesignated the academic unit as simply “the College of Arts and Sciences.”

A history professor told The College Fix that he “suspect[s] that other changes will follow” the removal of McMicken’s name from the college.

David Stradling, also associate dean for humanities in the College of Arts and Sciences, wrote in an email that he expects other parts of campus will lose the early donor’s name. His office is in McMicken Hall.

In a year-old video on behalf of the college, Stradling said he had just finished “the bicentennial history” of UC. He discussed why McMicken was under scrutiny: the university wants to create a “more inclusive community,” students and faculty at colleges nationwide have identified “problematic figures” in their history, and “our approaching bicentennial” naturally puts McMicken in the spotlight.

It’s not clear how the campus is reacting to the board vote. Independent student newspaper The News Record has not reported on the proposal since Dec. 12, when Pinto recommended the board approve the removal of McMicken’s name.

Aim to protect graduates from ‘pain or resentment’

One major factor behind the name removal is to save liberal arts graduates from the “pain or resentment” of their degrees bearing the name of an unsavory historical figure.

UC’s announcement said “the visible effect” of the removal would be on “diplomas, letterhead, business cards, web materials and advertising” associated with the college.

The administration emphasized, however, that the “McMicken” moniker was never formally chosen as the college’s name. It was applied in “recent decades … as the result of seeming happenstance and marketing-related decisions.”

The donor had never asked for his name to grace the college, and “available historical records” show that the college’s various names since its founding had never been “the result of formal action” by the board.

McMicken’s name will remain for now on several spaces that commemorate him, including McMicken Hall, McMicken Circle, McMicken Commons, and the “Mick and Mack” statues and cafe on campus. But they will be coupled with “digital displays” that put McMicken’s history in context.

The name could be removed piecemeal or in one fell swoop down the road. The board agreed with the working group’s recommendation to create “an established process” for reconsidering “a tradition, practice or symbol” that falls out of favor with campus opinion.

Asked about other spaces, traditions, titles or practices on campus that also warrant a similar inquiry, Stradling (below) cited a 20th-century example.

“The most problematic name on campus is Marge Schott Stadium,” the history professor told The Fix. The Cincinnati Reds owner was “a major donor to UC, and a very problematic woman.  I’m not sure that this process will inspire action on that name, but it seems like a likely target for change.”

MORE: Why is GWU still named after a slaveowner?

Trying to erase history? ‘You can’t deny the fact that this man funded our university’

Born in 1782, Charles McMicken was a Cincinnati businessman, philanthropist and slave owner who is rumored to have had children by two of his female slaves, according to UC’s website.

He financially backed African American resettlement in Liberia through the American Colonization Society, whose members included James Monroe and Andrew Jackson before their presidencies. (The society was not connected to black-led “back to Africa” movements.)

Although he was never formally educated, McMicken’s philanthropy had a focus on higher education donations.

In his last will and testament, he left the city $1 million worth of land for creating colleges “for the education of white Boys and Girls,” which would become the University of Cincinnati. McMicken also donated money to nearby Farmer’s College and frequently cut checks for the Cincinnati Ladies Academy of Fine Arts.

By the time the Legislature formed the university in 1870, a court ruling stated “that since people of color were not specifically excluded, the university was open to all,” UC’s website says.

It was the College of Arts and Sciences’ increased use of McMicken’s name in marketing at the turn of the century that provoked the movement against the namesake, according to the working group’s report.

“By 2015, objections to the use of McMicken’s surname” grew as more became aware of his “segregationist views and his association with slavery,” the report says. The college started weaning itself off McMicken’s name in marketing and communications, soon followed by multiple votes to remove his name officially.

The Department Heads Council voted unanimously in October 2017 to remove the donor’s name, followed by the Faculty Senate in April 2018 and the undergraduate student government in November 2018. The move was apparently not unanimous in the last body: The News Report cited a senator who warned peers that their rationale could be used to remove the Lincoln Monument.

“You can’t deny the fact that this man funded our university. He created the university,” Megan Piepmeyer said. “Are we going to slander somebody for something that was more of an issue for the country at the time?”

Not long after the student government vote, President Pinto charged the new working group with answering: “How do we manage Charles McMicken’s historical affiliation with the College of Arts and Sciences?”

‘Would you want a daily reminder of this on your wall?’

After considering the working group report, Pinto issued a “President’s Message” and a few pointers for trustees before transferring the ultimate decision to the board.

“Truth be told, McMicken’s place in our history has been too tidy for too long,” Pinto wrote. He took issue with McMicken’s “desire to fortify exclusion at our institution,” saying his legacy “reflects division and oppression.”

One of Pinto’s justifications for the name removal: the implications of its presence on diplomas.

“For graduates, the diploma is central and cherished,” the president wrote:

So what happens to our Arts and Sciences alumni when that prized possession causes pain or resentment because it memorializes McMicken? Would you want a daily reminder of this on your wall? And how can our future possibly be brighter if members of our Bearcats family feel the need to hide that diploma because of McMicken and his desire to fortify exclusion at our institution?

It’s alright if McMicken’s name triggers and angers students in physical spaces on campus, however, because his “role as a philanthropist cannot be denied,” Pinto explained.

Leaving his name on “building and land” is a “more fitting tribute to his original gift,” but only with the addition of digital displays that “more fully and fairly represent” McMicken’s relationship to UC.

Speaking of the remaining McMicken-named spaces, the report said that if “their evaluation becomes necessary,” the principles and framework behind the working group’s recommendations should “guide” similar inquiries. Any such assessment should be undertaken in a “respectful, deliberative and orderly fashion.”

The board agreed with the name change, proposed digital displays and “orderly” assessment process for other McMicken-branded spaces at its Tuesday meeting. It also said the UC Foundation, a separate nonprofit, will assess McMicken’s name “as it relates to philanthropic purposes or uses.”

MORE: Students don’t need protection from the past