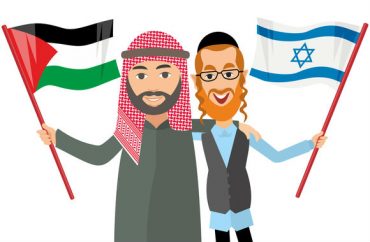 We get to decide what viewpoints you can express

One of the few leftist groups to have repeated run-ins with campus administrators is Students for Justice in Palestine.

The chapter at Fordham University has been fighting for campus recognition for more than two years. The New York Catholic school’s administration only dropped the pretense that it wanted “boilerplate” changes to the group’s constitution a year ago, when it overturned the student government’s vote to recognize the SJP chapter.

Now that SJP has gone to court to demand the school follow its own policies and recognize the club, the university is offering a compromise: Call yourself anything but “Students for Justice in Palestine” and we’ll recognize you.

Adam Steinbaugh of the Foundation for Individual Rights in Education was in court Wednesday to observe Fordham’s attempt to get the lawsuit dismissed, and he explains how state law allows those “aggrieved by the decision of a private college to challenge those decisions when they depart from an institution’s policy”:

The standard is fairly deferential to the college; a court will uphold the college’s decision if it is both “based on a rational interpretation of the relevant evidence” and the institution “substantially adhered to its own published rules and guidelines.” The question, then, is whether Fordham’s reasoning was rational and whether it followed its own policies.

Decide for yourself whether this sounds “rational”: Fordham first said the club could cause “polarization” on campus (the horror!) because its “sole purpose is advocating political goals of a specific group, and against a specific country” (Israel).

Later, the administration said its real fear was that the national SJP encourages “disruptive conduct on campus” wherever its chapters operate (not a far-fetched assertion). As Steinbaugh notes, if this is the real objection, it’s strange that Fordham’s first excuse was the horror of “polarization.”

Now Fordham is bringing back an argument that Dean of Students Keith Eldredge made a year ago, that the chapter’s parent organization has a toxic brand that will harm the campus if it’s recognized as such.

“That does not make sense,” argues Steinbaugh:

As Fordham would have it, there is a grave risk of violence, disruption, and polarization if a club were to be formed using one name, but that risk would be acceptably alleviated if students would just pick another name.

In its opposition to a motion for a preliminary injunction last month, Fordham said it’s a “privilege” to be recognized by the school, and the university conditions that privilege on pro-Palestinian student activists avoiding certain brands:

[W]hile Petitioners were denied official club status by the University, they were not precluded from promoting awareness and discussion of the Israeli-Palestinian conflict and/or the complex issues arising therefrom. …

[The club can’t show the required “irreparable harm” because] Petitioners have other alternatives to a pro-Palestinian club without the SJP moniker. Instead, they insist on being affiliated with SJP, a decision that was not supported by the University. …

A proposed University sanctioned club is one of many different ways to pursue conversation about the Israeli-Palestinian conflict. While an SJP affiliated club is Petitioners [sic] preferred vehicle to facilitate the conversation, it is certainly not the only method by which one can invoke dialogue and discussion on the topic. … Petitioners simply cannot do so with the financial and other support of the University under the moniker of their choosing.

Judge Nancy Bannon didn’t buy some of this argument, which was explicitly rejected by the Supreme Court in a 1972 ruling against Central Connecticut State College for its refusal to recognize Students for a Democratic Society, according to Steinbaugh.

The university’s lawyers couldn’t stick with a single justification for the SJP ban, he said, “uncomfortably” arguing first that the name was the problem and second that any club that criticizes a “specific group of people” poses a “reputational risk” (presumably students that want to associate with SJP will adopt its beliefs regardless of the club’s name).

Today, in court before the judge, Fordham's lawyers lied and said that during the deliberation process before Dean Eldredge vetoed us we were told that if we changed the name from "Students for Justice in Palestine" we would have been allowed to be a club. That never happened.

“Fordham’s attorneys somehow dug Fordham in deeper” by saying the administration gets to decide which viewpoints to recognize, Steinbaugh writes:

“Dean Eldredge still gets a vote,” they said, “after he says no, it’s over.” An unbridled veto over expression is not consistent with any semblance of the freedom of expression that Fordham promises its students. …

[Fordham] cannot simultaneously claim to be an institution committed to freedom of expression while continuing to engage in obvious viewpoint discrimination — denying recognition on the premise of a prediction that students will break rules if they express a particular viewpoint or give their organization a particular name.

Bannon did not issue a ruling Wednesday, so there’s still time for Fordham to find a way to save face. Like letting these students start an SJP chapter and then disciplining them if they violate university policies, rather than judging them guilty until proven innocent (admittedly a popular choice in higher ed).

Otherwise, its students – pro-Israel, pro-Palestine, and every other political position – should have no expectation that the university will respect their associational rights if it thinks their sought club will embarrass the administration.

MORE: SJP gets a taste of discriminatory treatment