Group is now about ‘anti-racism and ally building’

A listing for a “support” group for white people at the University of Maryland-College Park was quietly dropped from the school’s counseling lineup after drawing controversy, and replaced by an “anti-racism and ally building” group.

“White Awake,” intended for white students who “sometimes feel uncomfortable and confused before, during, or after interactions with racial and ethnic minorities,” had been publicly offered by the university at least since Sept. 1, the date of a cached page The College Fix accessed Friday. (That version has since disappeared, but a Sept. 11 cache of the page is still live.)

It was listed under the heading “Diversity Issues.” 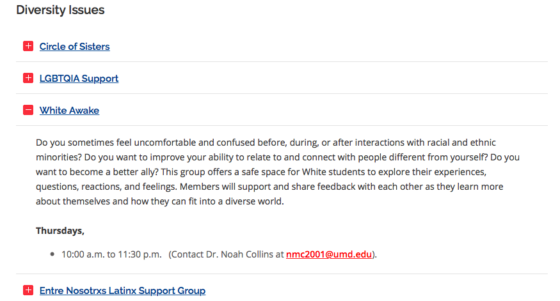 That listing was apparently scrubbed from the “group counseling” page sometime after Inside Higher Ed published an article on “White Awake” early Friday.

In its place is a new session called “Anti-Racism and Ally Building” that makes no mention of participants’ race but offers them help to “connect with people different from yourself.”

It’s still directed at white students, however. Both the original and revised groups include the line: “Do you want to become a better ally?” (The term “ally” in a racial context is often used as a synonym for “white.”) Both are led by the center’s staff psychologist Noah Collins.

When asked, the counseling center told Inside Higher Ed the group was not being shut down. The center did say that it would be revising a flier for the group that had met with criticism on campus:

“We agree with the feedback that the flier was not clear enough in conveying the fact that the purpose of this group is to promote anti-racism and becoming a better ally,” the counseling center said in a statement to Inside Higher Ed. “We didn’t choose the right words for the flier, and we are going to incorporate the feedback we have received into a revision of it.” 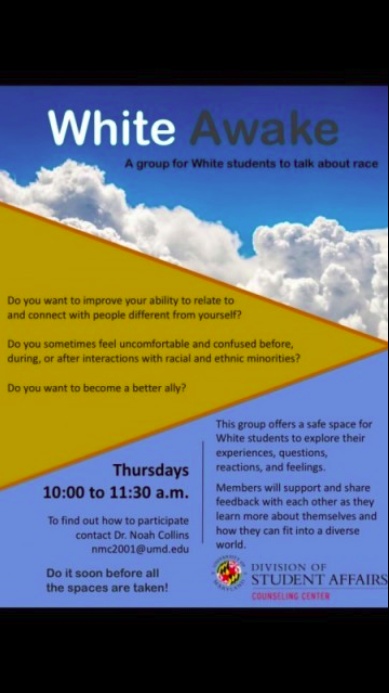 “Do you sometimes feel uncomfortable and confused before, during, or after interactions with racial and ethnic minorities?” the listing of the group read. “Do you want to improve your ability to relate to and connect with people different from yourself? Do you want to become a better ally?”

“This group offers a safe space for White students to explore their experiences, questions, reactions, and feelings,” the listing continued.

It is unclear when the group counseling page was edited. The College Fix asked the university via email when the editing took place, but campus spokeswoman Natifia Mullings did not directly answer, telling The Fix instead: “Although it is our intent to promote anti-racism, we acknowledge that there are members of our community that may have felt harmed by the naming of this group

“Our Counseling Center embraces multiculturalism as one of our key and most important values, as evidenced by its diverse staff, services and programs,” Mullings continued.

“The purpose of this effort is to promote anti-racism and becoming a better and more informed ally. Our Counseling Center acknowledges that we did not choose the right words in raising awareness about this research-based initiative, and how this group has been perceived is counter to the values of inclusiveness and diversity that we embody.”

In a Friday article published just after 8 a.m., Campus Reform claimed the White Awake group was “announced Friday” by the university. That timeline doesn’t jibe with the report by Inside Higher Ed, which apparently talked to the counseling center Thursday in the wake of criticism of the ad. Campus Reform doesn’t specifically explain how it learned of the group.

It’s also not clear how much outrage the ad generated. Campus Reform said it “met with harsh criticism from students on social media” but the only identified Twitter user to complain is UMD student Alysa Conway.

“I am ashamed over the execution of white awake nor do I fully understand its clause. ‘How they can fit into a diverse world’?” she tweeted Thursday:

I am ashamed over the execution of white awake nor do I fully understand its clause. “How they can fit into a diverse world”? Why do they need to attend therapy sessions on how to be a decent human being in society? Why do they need to have these sessions to learn how to coexist? pic.twitter.com/AaPOLz05vu

The original “White Awake” listing was apparently still live when The Diamondback published an article on campus reaction to the group just after midnight Friday. A reporter for the campus paper solicited student reaction on Twitter Wednesday:

David Akerman, a freshman journalism major, said the language being used to advertise the group concerned him as a Hispanic person.

“The way I interpret it is that white people are being victimized by interacting with us,” he said. …

Caleb Finesurrey, a graduate education major student, said he thought the premise of White Awake was unnecessary because “the world is a space for white people to talk in.”

“White people have laid down the rules and the groundwork, I feel like, and so they don’t need, necessarily, a privatized space,” Finesurrey said.

But student James Radko defended the group as a place to discuss race in an environment “where they’re not facing direct opposition from other people.” It’s seen as “inherently racist” when whites discuss race, he told the Diamondback.

Other universities have offered various types of groups and sessions in which white people have been singled out. At Kenyon College in Ohio earlier this year, a “white privilege” group mandated that “no white person can ask a person of color questions.”

At Pomona College two years ago, meanwhile, a student group was limited to “white people who believe white supremacy exists” and who were interested in “dismantling” it.

Read the Inside Higher Ed, Diamondback and Campus Reform reports.

UPDATE: Material has been added from The Diamondback, the campus newspaper.

UPDATE #2: This article has been amended to include a statement from a University of Maryland spokeswoman.