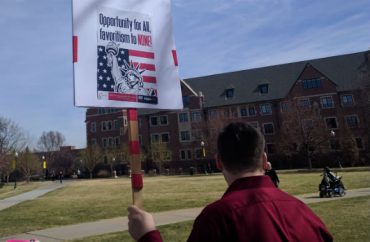 ‘Any speech that is disfavored by administrators could be censored,’ FIRE warns

DENVER – An administrator at Regis University told a student he couldn’t host a satirical “social justice bake sale” during the Catholic school’s Social Justice Week because it was an unpermitted “demonstration.”

Alexander Beck was offering cookies for prices based on the perceived oppression or privilege of each customer, with Asians paying more than whites and blacks paying more than Hispanics. Women and LGBT students got 25 cents off their race’s price.

Beck told The College Fix that he had learned offended students filed bias complaints against him for the bake sale, and that he was the subject of a secret meeting convened by the diversity office.

The Foundation for Individual Rights in Education (FIRE) has already gotten involved, warning the administration that it violated Regis’s promises to students by “arbitrarily” squelching Beck’s display.

The student has also accused the head of the diversity office – his academic adviser – of harassing him since the bake sale.

Satire is contrary to ‘Catholic character’?

He used the tabling event to advertise a “prospective” chapter of Young Americans for Liberty at Regis and promote right-leaning ideas that weren’t represented at SJW. (Another student tabling with Beck declined to give his full name.)

Beck said he was planning to give the bake-sale proceeds to the “Yiannopoulos Privilege Grant,” a scholarship focused on white males that was started by the anti-feminist provocateur, though he only sold two cookies before administrators intervened.

The Fix observed student reactions as they passed Beck’s table, which was across from a table associated with SJW. Several took offense, with one saying Beck should have advocated that Regis include right-of-center people in SJW events. Others claimed the bake sale was racist for charging different prices, and one student loudly announced he was more than happy to pay $1.25 because as a white man, he made more money than women and nonwhites.

As Beck’s table continued to draw more spectators, Dean of Students Diane McSheehy walked up to him, demanding an explanation of his activities and whether they were permitted.

Beck told McSheehy the Office of Student Activities had approved his table following his email request.

The dean responded that because his table was a “demonstration” and his YAL chapter was not yet recognized, he must come inside with her to discuss a separate approval process through McSheehy’s office that requires 48-hour notice.

He pointed The Fix to a paragraph under the “Demonstrations” policy in the Student Handbook, last updated in October, that he found “especially worrying”:

Regis University reserves the right to review, alter or restrict events, demonstrations, speakers or groups whose nature or presentation is contrary to or inconsistent with the University’s mission or Catholic character, which determination shall be in the sole discretion of the President or his designees.

You shouldn’t have called it ‘protesting’

McSheehy refused to let Beck and his tabling partner bring “our backpacks/phones/other personal belongings” into her office, specifically denying his request to record the conversation, he recounted to The Fix in an email.

Having been “given contradictory information from different people” about the rules, he simply wanted to keep track of who said what.

Beck later emailed President John Fitzgibbons’ office and McSheehy about the dean having “shut down” his permitted bake sale. According to the email chain shared with The Fix, the dean responded that she didn’t “shut down” his table, but simply told him “the correct process and procedures” for tabling.

McSheehy implied that Beck invited extra scrutiny by referring to his event as “protesting.”

After the bake sale, Beck said he received a critical message on Facebook that called his event “hate speech” and him a white supremacist. McSheehy has not responded to further correspondence from Beck, he added.

Beck reached out to FIRE, which sent Fitzgibbons a letter Wednesday to express concern about the stricter rules applied to any event deemed a “demonstration,” especially one that does not fit the category of “marches and large assemblies.”

Foundation for Individual Rights in Education letter to Regis University, March 2017 by The College Fix on Scribd

Program Officer Sarah McLaughlin pointed to the university’s self-proclaimed “academic traditions of honesty, freedom of expression and open inquiry” in its Student Conduct Expectations, and its prohibition on “[i]ntentionally and substantially interfering” with others’ freedom of expression in the Student Handbook.

While the private university is not bound by the First Amendment, it makes “contractual” promises to students that it must uphold, McLaughlin wrote:

Regis’ administration cannot simply shut down an approved student event by calling it a “demonstration” and claiming that approval from the university’s Event Services is not sufficient permission, due to the message conveyed. Under this practice, any speech that is disfavored by administrators could be censored on the basis that it could be seen as a “demonstration” against something.

Punish him under the school ‘points’ system

According to Beck, a student leader later told him that the diversity office, led by his academic adviser Nicki Gonzales, held a meeting March 21 about his bake sale. (The Fix is not naming the leader, who fears repercussions for leaking the meeting to Beck.)

It was attended by 30-40 people and led by students, who said they didn’t feel safe on campus and shared their experiences of meeting Beck at the bake sale, according to Beck’s notes from his conversation with the student leader.

Students suggested Beck be disciplined under the school’s “points” system, and they “shouted down” one student in attendance who said something mildly supportive of Beck.

The news of this meeting is “greatly concerning to me,” in addition to students “heckling me on my way to classes” and “mobbing my table at dinner,” Beck told The Fix. On Wednesday he overheard his name and the word “Antifa” – the loose-knit anti-fascist movement – come from a nearby cafeteria table, whose patrons were staring at him.

Beck said he met with Gonzales Thursday “to ensure that I was not misunderstanding what I had been told about the meeting.”

She became “defensive” and asked who had tipped him off about the meeting, at which point Beck left her office because “the conversation was going nowhere.” She followed him out and continued berating him, according to Beck.

Another university staff member, who spoke to one of Beck’s classes but whose name he doesn’t know, witnessed their interaction in the hall and “asked if it was ok.” At that point, according to Beck, Gonzales “began loudly telling me to ‘calm down.’”

She continued to follow him as he called his parents to warn them about Gonzales’s behavior and ask them to meet him on campus.

Both Beck and Gonzales ended up at the Campus Safety office at the same time, where she said she would “make a report of [her] own,” according to Beck. “I was feeling unsafe,” so he left campus and then requested a Campus Safety escort to return and collect his belongings, he said.

Gonzales has not responded to Fix queries to her office phone or diversity office email address to comment on Beck’s account of events.