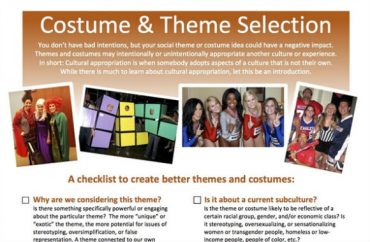 Even themes approved by school ‘can be carried out incorrectly’

Leave your cowboy boots and Hawaiian leis at home this Halloween unless you want to hear from University of Texas-Austin administrators.

Sorority and Fraternity Life, part of the Office of the Dean of Students, issued its updated “costume and theme resource guide” last week, instructing UT Greeks to avoid Halloween party costumes and themes that may “appropriate another culture or experience.”

It’s one of many school-sponsored guides or checklists recently given to the nation’s college students, particularly members of fraternities and sororities, telling them what they can and can’t wear in the runup to Halloween.

Though schools generally don’t list penalties for wearing a costume considered offensive, a Greek official at Pennsylvania’s Gettysburg College went so far as to warn fellow Greeks their chapters could be shut down if they wear the wrong costumes.

The UT-Austin document informs students right away that their costume and theme choices will be scrutinized year-round, not just for Halloween.

It advises them to keep themed social events “safe, appropriate, and fun,” and to avoid offending other subcultures by obeying a 29-point checklist.

The guide encourages students to avoid “exotic” or “unique” themes, especially those which may reference a “living culture” or “current subculture.” It suggests that “sensationalizing” transgender celebrities such as Laverne Cox and Caitlyn Jenner will be frowned upon.

“Have we consulted with ‘experts?’ Is it educational?” the guide advises students in the event they decide to portray a culture. Such “experts” include “community leaders or faculty.”

Students should also be careful to avoid “utilizing generic store-bought costumes” that may not be fully “authentic” if the theme is cultural, the guide says. It suggests hosting a “non-social event” if students want to “educate” each other about a culture.

It lists 11 separate “harmful” themes, including any “generalized representation” of Asian culture or “Indigenous” cultures, such as “Cowboys and Indians,” as well as “tropical” or “fiesta.”

MORE: Independent fraternies turn down U. of Colorado offer to regulate them

The guide provides mixed messages when it comes to cultures associated with white people. “Harmful” themes include “Golf Pros & Tennis Hoes,” “Trailer Trash” and “Chicks and Hicks,” but the guide approvingly cites “Catalina Yacht Mixer or ‘Preppy’” in a section on suggested themes that also includes “Rep Your Favorite Team” and “Alphabet Theme.”

Reflecting the guide’s overall tone of warning, however, students are admonished to consider how even the themes explicitly endorsed by the guide “can be carried out incorrectly” if party planners don’t provide “information about costuming.”

A spokesperson for the Office of the Dean of Students told The College Fix the resource guide was shared with all “student organizations who host thematic social events,” not just Greek life, and that it’s posted on the dean’s website “year-round.”

The document does not represent “rules or policies of the university,” but “students can expect to be accountable to their peers for how they represent themselves and our campus,” she said without elaborating.

One such way students can hold each other accountable is by reporting bias incidents to the Division of Diversity and Community Engagement’s Campus Climate Response Team.

The first potential example of bias on the reporting page is: “Do you know of a student organization hosting a party with a racist theme?”

The dean’s spokesperson has yet to answer a Fix query on whether UT-Austin’s response to bias incident reports is anything like the new reporting process at the University of Wisconsin-Madison.

That revised policy received the blessing of the Foundation for Individual Rights in Education for narrowing the definition of “bias and hate” and removing punitive or even educational consequences for targets of bias complaints.

The UT resource guide drew criticism from Allison Peregory, communications director for UT’s Young Conservatives of Texas chapter. “There are certainly costumes people decide to wear on Halloween that are in poor taste, but the people who decide to wear these costumes have the right to do so,” she told The Fix in an email.

MORE: Some costume ideas for triggering people on Halloween

‘It hurts recruitment, hurts our image’ – and could shut us down

Gettysburg College Greek life is on such thin ice that one complaint about costumes could sink an entire chapter, a high-ranking Greek official suggested in a Thursday email obtained by The Fix.

Writing on behalf of the Greek Committee on Equity and Inclusion, formed on campus last spring, Sigma Chi Consul Chandler Robertson told Greek members that he “cannot emphasize enough how important it is that you be cautious” in choosing a Halloween costume. “There exists a perception of Greek organizations as backward thinking, and prone to incidents of bias,” he said. “We know this is not true; that does not matter, however. The perception of others is our reality, whether this is fair or not.”

Robertson reminded Greeks that “people who might not go out often will likely make it to fraternities this weekend,” and they might be offended by a member’s costume: “It hurts recruitment, hurts our image, and isn’t worth the problems it can cause for your organization.”

Even stopping to think about whether a costume might offend someone means “it is not worth the risk” to the entire chapter, he said.

“There are chapters across the country that no longer exist because of bias incidents,” Robertson continued. “I do not want to see that happen here, and I believe we are all committed enough to making our campus a better place that we can make it through this weekend without incident.”

MORE: U. of Florida offers 24/7 counseling for people offended on Halloween