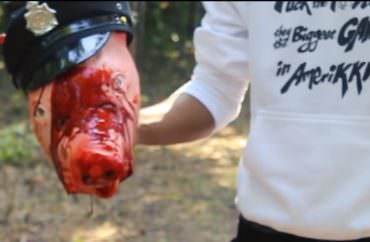 The University of Wisconsin-Madison has denounced and removed an anti-cop video posted on a university server after the student-created video was criticized for its “vile and racist” sentiments.

The video serves as a commercial for a student’s racially charged “conversation-sparking” clothing line and depicts cops as pigs and includes the fictional beheading of a police officer.

In the wake of the video’s posting, a Republican state senator characterized the video as “vile and racist” while a Wisconsin free market think tank questioned whether any university funds or support aided in its creation.

Near the beginning of the controversial video, a scene shows cops, wearing pig masks, hanging an African-American with an American flag noose. Later on, an actor leads a group of black individuals as he carries the bloody head of a cop and a bloody machete while wearing a sweatshirt reading “Fuck the police, they the biggest gang in AmeriKKKa.”

The Badger Herald reports the video, which The College Fix reported on yesterday, was hosted on a university “cloud based” file-sharing service known as UW-Madison Box. The university has since removed the video, it confirmed in an email to The Fix.

“This action violated our IT policies on commercial use, as the video is promoting a clothing line,” spokesman John Lucas said. “The link was removed and we’re working to have the content removed from our servers entirely.”

The video is a commercial for a new line of clothing created by University of Wisconsin student Eneale Pickett. His clothing brand targets police brutality and racism and has included hoodie sweatshirts that state “All White People Are Racist.”

Apparel worn in the controversial commercial includes phrases such as “I would ask for justice but I know she’s helping the cops burn my body,” “No #hashtag can ever bring me justice, I’ve seen my death way too many times to imagine myself different,” and “Destroy the city that caused you to bury me.”

On Wednesday, the video received a strong rebuke from Republican state Sen. Steve Nass, who called on the university to discipline the students behind the video as well as for an investigation from local police and the state’s Department of Justice.

“This vile and racist anti-police video is clearly a direct threat to the brave men and women that serve behind the badge,” Nass said in a press release.

Nass later told local television station WISN that it was “unbelievable” when he first saw the video.

In a Facebook post published on Wednesday evening, Pickett posted a photo of Nass’s press release and commented “I hit a nerve.”

A spokesman for the John K. MacIver Institute for Public Policy, a free market think tank that posted the video on its website, said the incident raises eyebrows.

“Note the highly produced quality of the video. That it was seemingly posted to an university server raises the question of whether university money went into this or if it was produced with university support,” Communications Director Chris Rochester said in an email to The College Fix.

The think tank said the university did not return its calls, but did provide the organization with the school’s statement on the incident.

The statement released by the University of Wisconsin-Madison distanced the school from Pickett’s video and his clothing line stating “the university strongly condemns the glorification of violence such as that contained in the promotion of a student-produced clothing line.”

The statement affirms the university’s support for police and rejects calls for violence to achieve political means.

“All citizens have the rights to express political beliefs that others may find objectionable, or even counter to the values of the institution,” it adds. “The individual in this situation is engaging in a private business activity, unrelated to his status as a UW–Madison student. The clothing in question is not produced, nor endorsed by UW–Madison.”

UPDATE: This article has been updated to include that the University of Wisconsin-Madison provided the MacIver Institute for Public Policy a copy of its statement on the video.