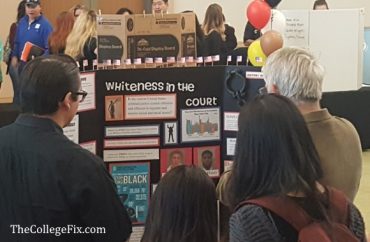 Students at Cal State San Marcos on Thursday hosted a “Whiteness Forum” as part of a communications class they are enrolled in, setting up more than a dozen displays that highlighted what they contend is how white privilege has oppressed people of color in a variety of ways.

A “white beauty standard” display stated “we are studying the white hegemonic ideals of the beauty industry.” Another asked “who does whiteness say that you are,” noting “whiteness studies” is defined as “the study of the system of white dominion in our society with a focus on ideologies of white supremacy as collective, rather than white individuals.”

A “Make America White Again” display included an image of Donald Trump’s baseball hat and argued his campaign has led to a wave of hate crimes.

Other displays: “Gentrification is the new Colonialism,” “Stand up for Standing Rock” and a “Wheel of Whiteness.”

During the two-hour event, students who created the displays talked to guests about their projects, explaining their studies and quizzing passersby on facts and figures relating to race. One group had guests spin the “Wheel of Whiteness.” Another passed out “gentrification is the new colonialism” stickers.

“Students learn best when they actually do something as opposed to just hear something,” said Professor Dreama Moon, who teaches the communications class called “Communicating Whiteness.” Every year for the last 13 years, students have created projects to pull together the forum as part of the class, she said.

Moon, in an interview with The College Fix, said “we need to learn how to have a conversation with people, to engage.”

At the start of the forum, Moon told the crowd that “one thing you can do today is to begin to educate yourself about white supremacy and learn how to not support it and how to help eradicate it.” She also pointed out a “boycott/support” table, which Moon said “tells you how to support businesses that support your values.”

A flier titled “Boycott in Solidarity” stated that “in the aftermath of Donald Trump being the new President-elect, several companies have come out and shown their support to his rhetoric. Many people might not know which companies, so we want to bring some awareness to it and let you know what companies you might want to avoid and possibly boycott.” NASCAR, the UFC, Jenny Craig, Macy’s, Hobby Lobby, Amazon and others were on the list.

The syllabus for the class states the course seeks to examine “whiteness as a historical, social, political and ideological ‘invention’ with a long trajectory within the United States and in the world.” The syllabus defines whiteness “as a system of power based on racist ideology maintained discursively, institutionally, and materially.”

“Remember that no one, regardless of color, escapes whiteness altogether.
Many of the values and privileges of whiteness are built into academic discourse, law, education, and other social systems. Whiteness is even deeply connected to the identity formation of U.S. people of color as well as white folks,” states the syllabus, a copy of which was obtained by The College Fix.

The “Whiteness Forum Project” was an assignment in the class in which students were called on to “research, plan, and execute an educational forum on whiteness on the CSUSM campus.”

“The objective of the forum is make whiteness visible in a critical way for faculty, staff, and students on our campus as well as the greater community,” the syllabus states. “The forum WILL NOT be a simple cultural celebration of whiteness, but an arena for critical education.”

Several students at the forum heaped praise on the class.

“I think it’s a great class to be more aware of certain privileges that are at place,” said senior Faatauvaa Wong.

“It’s a class where I have an ability to reflect on my personal identity,” she said. “This class allowed me not just self reflection, but allowed me to apply what I learned and help people realize their identities and why racial issues are important to understand.”