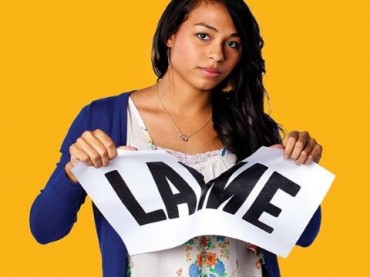 What ever happened to “sticks and stones may break my bones but names will never hurt me.”

Pacific Lutheran University is another campus admonishing students through its “Words Can Hurt” campaign to use nice language, and not say anything that might offend anyone in the least.

The first posters, which appeared in 2012, featured students tearing up phrases including “That’s so gay,” “Lame,” “Retarded,” “Ghetto,” “Fat” and “Illegal.” “We then decided to expand the words,” [Diversity Center administrator Angie] Hambrick said. “We really wanted the campaign to be about individual choice—words that they’re hearing and words that they’ve chosen not to say. They’ve heard those words—maybe even used them—but they now understand these words have impact even when the intent is not to hurt. We have to take responsibility for the impact on others, and on ourselves.”

A memo on the school’s website explains the campaign originally launched through “a generous grant from The Pride Foundation, a Queer philanthropy and advocacy organization in Seattle in 2012.”

“The words and phrases of the campaign continue to expand— Dumb Blonde, Lame, Passive, Angry, Exotic—since at the heart of the campaign is each participant’s personal responsibility and choice,” the memo adds.

The campaign has been plastered on billboards in the region thanks to a Clear Channel Communications donation. The campaign is also spreading to nearby high schools.

“Now those original posters—along with newer ones featuring more students, more I-won’t-say-these-words plus faculty and staff—are showing up on 112 billboards throughout the Puget Sound region, in Tacoma Public Schools, on the PLU campus, on social media, on the PLU website—and in a brand-new K-12 downloadable teachers kit,” the school’s website states.