This past week played host to the University of Pennsylvania’s 21st Reverend Dr. Martin Luther King Jr. Lecture in Social Justice, the discussion topic being “reproductive rights” and anti-racism.

Led by Planned Parenthood’s Alexis McGill Johnson and UPenn’s “acclaimed scholar of race, gender and the law” Dorothy Roberts, the talk centered around the “intersectionality” of abortion rights and how racism and white supremacy allegedly “have always been at the heart of assault on reproductive freedom.”

McGill Johnson said that we’ve “never been closer to losing such a fundamental constitutional right” regarding the possible overturning of Roe v. Wade. She also claimed contemporary anti-abortion efforts are like a “21st century version of the Three-fifths Compromise.”

Ironically, she also said there is no state in the Union where “banning or restricting” abortion is popular. If this is true, there should be little concern if Roe is overturned … as such would return abortion “rights”/restrictions to the states. If state legislators ban or severely restrict the procedure, then the legislation’s alleged unpopularity would mean these individuals will be voted out of office, right? 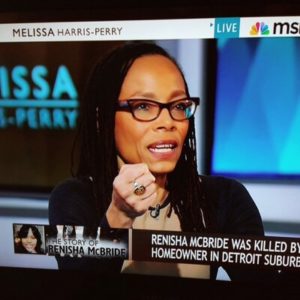 Roberts (left) noted that she is “shocked” at the notion states can do “whatever they want to create burdens” regarding the exercising of a constitutional right. (Roberts has had a past issue with “empirical facts,” noting that when scientists are “fueled” by such “systematically suppressive policies then prevail.”)

With regards to Dr. King, Penn President Amy Gutmann noted that when he was asked “how health care fit into his message on social justice,” King said “Of all the forms of inequality, injustice in health is the most shocking and the most inhuman because it often results in physical death.”

Aside from the irony of using that statement at a pro-abortion confab, the truth is that not much is known about the civil rights leader’s view on the topic. Pro-abortion advocates have to rely on rhetorical sleights of hand to fit King into their ideology.

Take this 2013 Think Progress article. It says “King was hardly a fierce opponent of Planned Parenthood or the range of women’s health services it provides. In fact, his support for the organization’s family planning programs is well-documented.” Terms like “family planning,” “reproductive health” and “reproductive rights” are used throughout. But there is no mention of King actually supporting abortion.

King did accept an award from Planned Parenthood in the mid-60s … because he had no issue with birth control. While LifeNews.com’s Darrick Evenson wrote in 2011 that researchers (he doesn’t day which) have shown King was definitively against abortion, he points out that PP itself, at least publicly, also was anti-abortion at the time. A 1963 pamphlet from the organization read “Is birth control abortion? Definitely not. An abortion kills the life of a baby after it has begun. It is dangerous to your life and health. It may make you sterile so that when you want a child you cannot have it. Birth control merely postpones the beginning of life.”

While King, had he lived, may have become (definitively) pro-choice, consider how one of his associates, Jesse Jackson, once felt about the issue. At the 1977 March on Washington, Jackson told those assembled

There are those who argue that the right to privacy is of [a] higher order than the right to life … that was the premise of slavery. You could not protest the existence or treatment of slaves on the plantation because that was private and therefore outside your right to be concerned. What happens to the mind of a person, and the moral fabric of a nation, that accepts the aborting of the life of a baby without a pang of conscience? What kind of a person and hat kind of a society will we have 20 years hence if life can be taken so casually?

Jackson’s argument is now often used by conservatives, who are then slammed for it with epithets like “racist” and  “misogynist.” Still, given Jackson’s view on the issue while King was alive, it’s a good bet MLK held the same belief.