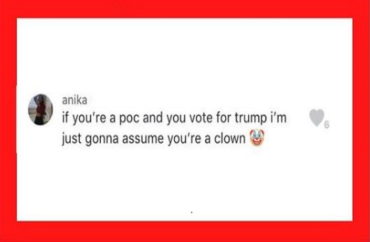 The College Republicans at the University of Southern California have taken matters into their own hands to expose abusive messages sent to conservative students after they say university officials have done nothing to help stop the online bullying.

The initiative is called Trojan Truths and aims to expose and challenge the hateful messages they have received from others on campus by publishing the comments for the world to see.

The series consists of actual screenshots of messages sent to center-right students from peers, edited to conceal full names. The USC GOP then adds thoughtful rebuttals.

The project launched in late January and to date they’ve posted 18 “Trojan Truths.”

“Our purpose is only to shed light on the conservative experience in college in hopes that USC and [the] wider world wakes up,” the group said on its Instagram account, which is where it posts the “truths.”

Molly Davis, vice chair of the USC College Republicans, told The College Fix that the messages they are highlighting came from a group chat created in the summer of 2020 as a way for incoming students to connect.

“This seems like a good idea, especially considering school was and is online, and a virtual communication forum would be a good way to make friends,” Davis said of the GroupMe. “However, this chat went from freshmen trading class schedules to hurling political insults towards anyone right of far left.”

Davis provided screenshots of chat logs to The College Fix, which basically mirror what the group has been posting on Instagram.

One student had told their fellow peers “if you’re a person of color and you voted for Trump, you’re a co*n” and another said, “this is true co*n-like behavior.” Another posted in the chat, “just popped in to make sure the bigots were getting sufficiently educated.”

Another student called “all ‘trumpets’ and especially POC trumpets a bunch of clowns and hypocrites.” One student was called “racist, transphobic, sexist, and a rape ableist” for supporting President Donald Trump.

One student told others, “If you support Trump, you are a racist and that’s the end of the story.” Another student said he “feels worse about (himself) knowing (he) had to compete for admission with people who unironically support Trump.”

The GroupMe had no moderators “but anyone in the chat has the power to remove anyone else at any time” which “was never used in good faith,” Davis said.

Davis said students turned to administrators for help over the barrage of online bullying and harassment to no avail. Officials just basically offered to provide them counseling services, she said.

The Fix reached out to USC university officials who did not respond to requests for comment.

Davis explained her story further in a statement to The College Fix:

In the wake of the death of George Floyd, Instagram users were posting black squares to represent their opposition of police brutality. A student at USC, our current chairman, Albert, did not post a black square, simply because posting a black square does not actually do anything at all to fight real racism. Once his coworkers discovered this, they signed a petition to get him fired from his on-campus job as a fitness instructor. They also took to their own social media accounts, tagging Albert, exposing his address, and calling him a racist, sexist, and homophobe. One USC student, whom Albert had never met before, messaged him saying, “maybe you don’t feel a part of the Trojan family because they don’t make condoms small enough for your microp***s…” Threats ensued and instead of taking real action against the students harassing him, USC referred Albert to the “Threat Assessment Team,” where he was encouraged to go through training to “improve his online presence.”

Personally, my roommate from USC posted on her Snapchat story, calling me “very f*****g sick” and a “f*****g coward,” after I did not post a black square. I was also called a racist, homophobe, and a sexist (ironic, because I am a female) by my suite-mate after I posted a picture of my friend from high school wearing a Trump hat.

Albert and I are both leaders of our executive board now, though we weren’t even a part of USC GOP at the time of our respective incidents. After sharing similar stories and hearing from the freshmen, we decided to begin posting “Trojan Truths.”

The students plan to continue to post Trojan Truths as a way to fight back, Davis told The Fix.

“Unfortunately, this group chat is just a peek into the harassment that conservatives face on campus every day,” Davis said. “The university said they will not take any action against the students, making the double standard clear. Our only outlet is social media and the press.”

MORE: USC capitulates to the ‘movement,’ removes John Wayne exhibit due to racism