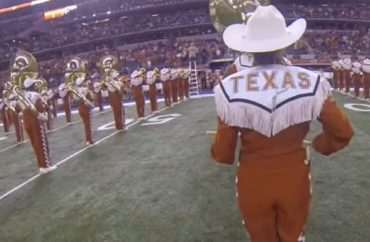 The University of Texas at Austin has announced that it is in the process of creating a second marching band, separate from the school’s current Longhorn Marching Band.

The currently forming unnamed band will provide an alternative involvement option for students who want to participate in marching band at UT but who do not want to play the school’s controversial alma mater “The Eyes of Texas.”

“The Eyes of Texas,” typically played by the Longhorn Marching Band at football games, came under scrutiny at UT over the last year after the wave of George Floyd protests.

Some drew attention to the song’s ties to blackface performances in the early 1900s. Some members of the school’s marching band felt the song was racist toward black students and therefore should not be performed.

The Eyes of Texas lyrics

But a number of alumni donors were against canceling the song, explaining that they would withhold funding should the school side with student activists.

Ultimately, UT announced that the Longhorn Band will be required to play “The Eyes of Texas.”

Later, a research committee published a 59-page research report on the implications of the song, concluding it will remain the school’s alma mater for lack of sufficient context supporting racism in it.

The allegation that the lyrics were in part inspired by the words of Confederate Gen. Robert E. Lee were debunked in the report. Some students held the belief “The eyes of Texas are upon you” was derived from the general’s saying that “the eyes of the South are upon you.”

But the phrase dates back for millennia, the report notes.

“In the earliest example, the Book of Job declares, ‘For His eyes are on the ways of a
man, and He sees his every step.’ Other uses of the line include President George Washington saying ‘the eyes of the nation are upon you.’ Based on the evidence, the committee concluded that there was a very low likelihood that the line originated with Robert E. Lee and was instead a message of encouragement and accountability to the students and faculty at the then-fledgling university,” the report stated.

As to its minstrelsy origins, “While ‘The Eyes’ debuted at the ‘Varsity Minstrels’ fundraiser for the track team in 1903, the most the report could say about its performance was that the singers were ‘almost certainly’ white and ‘probably’ wore blackface, given the ‘overwhelmingly white [student body] at that time.’ No hard evidence, such as photographs or text documentation of the singers’ appearance, could be found,” The College Fix previously reported.

And regardless of its origins, the song took on a life of its own over the last century.

“The alma mater has been an integral part of the lives of UT alumni for generations,” Texas Monthly reported. “It is sung at weddings, funerals, and birthday parties, and, of course, by 100,000 fans at Longhorn football games.”

“‘The Eyes’ was even sung in the movie Giant and, anachronistically, in the John Wayne film The Alamo (the battle was fought 67 years before the song was written),” Texas Monthly reported. “Elvis sang it in Viva Las Vegas, marching around a dance floor, beating a bass drum. Astronaut and UT alum Alan Bean famously had the lyrics printed on a piece of silk so that he could take them on his 1969 trip to the moon.”

In efforts to compromise with members of the marching band who continue to believe the song is racist, the university will create the second marching band, which will not be required to play the school’s fight song or their controversial alma mater.

The band will be “designed for individuals who want to perform in a marching band, with a focus on leading/directing bands and community engagement,” according to the announcement on UT’s school of music page.

“The band will be an academic for-credit course through the Butler School beginning in fall 2022 that will not play the university alma mater or fight song,” it states.

In response to questions from The College Fix as to how this decision was reached, UT’s Director of Media Relations J.B. Bird explained that the school’s President Jay Hartzell had the final say in maintaining the playing of “The Eyes of Texas.”

“[T]he president made the decision last summer that the song would remain as the university’s alma mater,” Bird said via email.

In explaining the recent decision, Hartzell said in a statement that the decision to form an alternative band and expand band scholarships is a “multi-million-dollar commitment over the next five years.”

The news release states the decision was prompted in part by concerns about “The Eyes of Texas,” but also due to “ongoing funding challenges.”

The new plan will “expand long-term funding for all university bands, resulting in increased performance options and reduced financial burden for students.”

Along with the creation of the new band, UT has announced a number of equity measures for their performing organizations, such as providing “social change” opportunities, eliminating performance fees for band members, and creating a “security plan” to insure the safety of its members, according to the news release.

Members of both bands will also be provided a performance scholarship of $1,000 for regular student involvement and $2,500 for section leaders, it adds.

Rising senior students who choose to opt out of the Longhorn band will also receive the $1,000 scholarship.