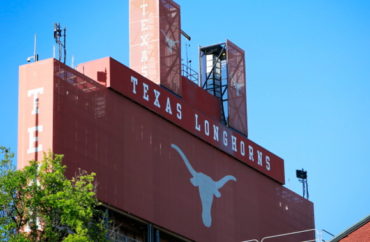 A number of wealthy alumni are threatening to withhold future donations unless the school more actively promotes “The Eyes of Texas” as its fight song, according to a recently released trove of emails sent to University of Texas at Austin President Jay Hartzell.

The emails, obtained by the Texas Tribune, show hundreds of alumni and donors complained to Hartzell when no UT football players joined quarterback Sam Ehlinger on the field to sing the fight song after the team’s loss to rival Oklahoma.

The singing of “The Eyes of Texas” is a post-game tradition, although some students have grown uncomfortable with the song, claiming it has ties to minstrel shows where performers wore blackface. The song’s title is also taken from a saying by Confederate Army Commander Robert E. Lee.

But a number of wealthy donors and alumni were “disgusted” that Ehlinger was on the field alone.

“My wife and I have given an endowment in excess of $1 million to athletics,” wrote one donor.

“This could very easily be rescinded if things don’t drastically change around here,” he said, adding, “Has everyone become oblivious of who supports athletics??”

The names of a number of alumni and donors were redacted in the emails released by the school to protect the donors’ identities.

Hartzell has been supportive of keeping “The Eyes” as the school’s fight song, even insisting it be played over the stadium’s PA system during sporting events when a number of band members refused to play it.

But according to a Texas Tribune analysis, alumni and donors are still very much concerned about the future of the song. The paper found that 70 percent of the 300 people who emailed Hartzell about “The Eyes” between June and October were in favor of the school continuing to play it.

In a statement emailed to The College Fix, Hartzell said the Texas Tribune’s use of a “small sample” of around 75 emails “misrepresents the views of over 540,000 living alumni.”

“This has led some to make false inferences about our values and actions,” said Hartzell, adding, “The Eyes of Texas represents a difficult conversation focused on a hard topic.”

“Equipped with a common set of facts, we will then continue the conversation about our school song, Hartzell said.

“Having spoken to students and faculty on the committee, I truly believe we can be a model for how communities address complex problems and move forward together.”

In one email received by Hartzell, alumnus and school donor Larry Wilkinson suggested that since less than six percent of the student body is black, their perspective should not dominate the discussion and that black students should leave the school if they couldn’t handle it.

“The tail cannot be allowed to wag the dog….. and the dog must instead stand up for what is right,” wrote Wilkinson. “Nothing forces those students to attend UT Austin. Encourage them to select an alternate school ….NOW!”

“This professor is in charge of the team/ that tells us whether the song is racist or not?,” reads the email circulated by Hoffman. “His Twitter account is filled with race baiting and cry baby [Black Lives Matter] junk,” read the caption below the photo. “UT better get it together and use its brains, not this biased ‘victim’ professor at UT!”

Hartzell fired back in the statement sent to The Fix.

“With regard to the very small number of emails I have received and comments made that are abhorrent or hateful, I categorically reject them and they bear no influence on any aspect of our decision-making as a university,” said Hartzell. “They also do not represent the Longhorn nation I and so many others know and love.”

But if the school’s donors withhold their funds, the decision could be a very costly one for the school.

“It is disgraceful to see the lack of unity and our fiercest competitor Sam E[h]linger standing nearly alone,” said one donor, adding, “It is symbolic of the disarray of this football program which you inherited. The critical race theory garbage that has been embraced by the football program and the university is doing massive irreparable damage.”

Ehlinger later explained he was just milling on the field talking to coaches, and that he sang the song because it made him feel more connected to his late father, with whom he watched UT-Austin football games as a child.

Complicating matters is the fact that the Texas Longhorns are in a years-long slump on the football field. Between 2014 and 2016, the team failed to finish with a winning record. While they have finished above .500 since then, the Longhorns have not returned to their glory of 2005, when they won the national championship.

This led to the hiring of new coach Steve Sarkisian, who has said the players will “proudly” sing the fight song. This is in contrast to past coach Tom Herman, who gave players the option of not singing if they found the song objectionable.

The College Fix reached out to a number of groups representing minority students and faculty on the UT-Austin campus. None opted to comment.