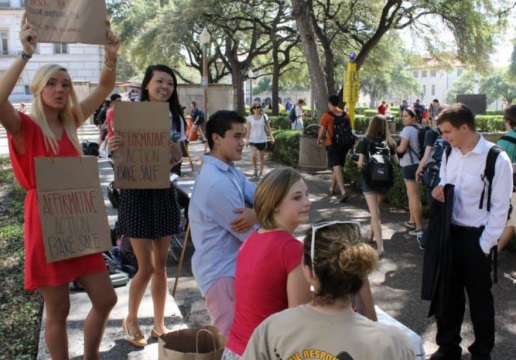 Conservative college students at the University of Texas have been wrongly vilified for creatively and deliciously pointing out the inherent flaws of affirmative action through their recent “Affirmative Action Bake Sale” at the Austin campus.

The crux of the bake sale controversy is the Young Conservatives of Texas-Austin’s pricing sign that listed the brownies and cookies as follows: “$2 white,” “$1.50 Asians,” “$1 Latino,” “75 cents Black,” and “.25 cents Native American.” On the side of the sign it read: “25 cents off for all women.”

Clearly the conservative students at the University of Texas aimed to illustrate the absurdity of giving preferences – monetary and otherwise – based on race, ethnicity or gender. But Dr. Gregory Vincent, vice president for diversity and community engagement at the University of Texas at Austin, swiftly denounced the conservative students’ obvious political statement, calling it “inflammatory and demeaning.” The student newspaper chimed in by giving Vincent a “horns up” for taking on the students. Some comments on the conservative students’ Facebook page are downright disgusting, calling the group “attention whores” or “backwards a**holes.”

Vincent, in his statement, argued that “the choice of a tiered pricing structure creates the misperception that some students either do not belong at the university or do not deserve to have access to our institution—or worse, that they belong or deserve only to a certain degree.”

OK, essentially that’s a backhanded way of calling these students racist. As an administrator of the campus, that is a shameful abuse of power and wholly inappropriate.

What’s more, he’s dead wrong. The students – at the campus at the heart of the recent Fisher v. University of Texas Supreme Court decision that did not look favorably on affirmative action policies – clearly just aimed to illustrate that racial preferences are so obviously flawed that a simple bake sale demonstration proves that out.

“Although it is their right to do so, it is deplorable that a few students took advantage of this open forum to direct negative sentiment toward their peers,” Vincent wrote.

What’s actually deplorable, however, is that people are still judged today by the color of their skin rather than the content of their character. That the larger point these kids made has instead been lost in ad hominem attacks against them.

“The YCT’s approach to this issue also ignores the fact that demographics are just one of many criteria taken into account when applying for admission to UT, a fact that the university has repeatedly and staunchly defended in the Fisher v. UT case,” Vincent wrote.

Are just one of many criteria? By “demographics” he’s partially referring to race, and it shouldn’t be a criteria at all.

The Supreme Court, in a 7 to 1 ruling in the Fisher case in June, avoided making a sweeping ruling on affirmative action in college admissions in a result described as a partial victory for opponents of racial preferences.

Justice Clarence Thomas even wrote in a separate opinion that the court should have taken the opportunity to make a more comprehensive ruling, saying: “I write separately to explain that I would overrule Grutter v. Bollinger, and hold that a State’s use of race in higher education admissions decisions is categorically prohibited by the Equal Protection Clause.”

Jennifer Gratz, a well-known civil rights activist and CEO of the XIV Foundation, said at the time: “The Court once again confirmed that universities must be moving to end these policies and that they must first attempt to achieve diversity through race-neutral means.”

Underscoring all this, what is perhaps the most striking of all in regard to this embattled UT bake sale – is the pictures of these Young Conservatives of Texas making their brownies and cookies and selling them on the campus’ West Mall. Despite clearly having a diverse mix of members – Latino, white, Asian and so on – they came together as Americans. They see far beyond color lines and ethnicity charts.

I called Lorenzo Garcia, the student chairman of the Young Conservatives of Texas-Austin, for a comment. He said the group is set to put one out later this week.

Until then, bravo, Young Conservatives of Texas, for standing up for America, common sense, and the belief that all individuals can achieve great things without special treatment or government handouts.