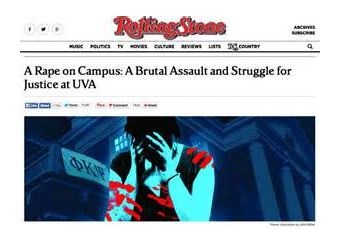 It was a story so horrific, so shocking, so sensational – that it gripped a nation and nearly destroyed the reputation of one of the oldest and most respected colleges in the nation.

Turns out, the story cannot be verified, and now people are fighting back, saying the allegations just aren’t true.

A student named Jackie who claimed to Rolling Stone magazine that she was brutally gang raped by seven guys at a frat party in 2012 at the University of Virginia was somewhat retracted by the magazine Friday. Here is the statement from its editor:

Last month, Rolling Stone published a story titled “A Rape on Campus” by Sabrina Rubin Erdely, which described a brutal gang rape of a woman named Jackie at a University of Virginia fraternity house; the university’s failure to respond to this alleged assault – and the school’s troubling history of indifference to many other instances of alleged sexual assaults. The story generated worldwide headlines and much soul-searching at UVA. University president Teresa Sullivan promised a full investigation and also to examine the way the school responds to sexual assault allegations.

Because of the sensitive nature of Jackie’s story, we decided to honor her request not to contact the man she claimed orchestrated the attack on her nor any of the men she claimed participated in the attack for fear of retaliation against her. In the months Erdely spent reporting the story, Jackie neither said nor did anything that made Erdely, or Rolling Stone‘s editors and fact-checkers, question Jackie’s credibility. Her friends and rape activists on campus strongly supported Jackie’s account. She had spoken of the assault in campus forums. We reached out to both the local branch and the national leadership of the fraternity where Jackie said she was attacked. They responded that they couldn’t confirm or deny her story but had concerns about the evidence.

In the face of new information, there now appear to be discrepancies in Jackie’s account, and we have come to the conclusion that our trust in her was misplaced. We were trying to be sensitive to the unfair shame and humiliation many women feel after a sexual assault and now regret the decision to not contact the alleged assaulters to get their account. We are taking this seriously and apologize to anyone who was affected by the story.

What’s more, representatives for the frat whose members were accused of the assault also rebutted Jackie’s claims Friday, telling The Washington Post:

Officials close to the fraternity said that the statement will indicate that Phi Kappa Psi did not host a party on Sept. 28, 2012, the night that a university student named Jackie alleges she was invited to a date party, lured into an upstairs room and was then ambushed and gang-raped by seven men who were rushing the fraternity.

The officials also said that no members of the fraternity were employed at the university’s Aquatic Fitness Center during that time frame — a detail Jackie provided in her account to Rolling Stone and in interviews with The Washington Post — and that no member of the house matches the description detailed in the Rolling Stone account.

In an interview with The Washington Post, Jackie still stands by her story of the events of that night.

She told Rolling Stone that she was lured into a dark room, thrown into a glass table which shattered beneath her, was raped for hours on end atop the glass by seven young men, and left bleeding. She stumbled out of the frat house and called her friends, who told her to sleep it off so she wouldn’t ruin their reputation, she claimed. Then she turned to the school, which was unsympathetic to her plight, Jackie had said.

It was all too much to believe. Many started questioning the story. Now it has fallen apart.