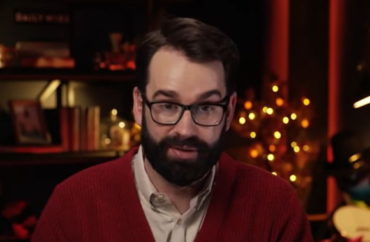 Matt Walsh event was ‘hate crime against women,’ and promoted violence, according to complaints

University of Wisconsin-Madison students, faculty and staff feared a conservative event that criticized gender ideology represented a “hate crime against women” and would promote violence against LGBT individuals, according to documents obtained by The College Fix.

The Fix recently obtained bias incident reports through a public records request for complaints made against the Young Americans for Freedom event featuring Matt Walsh.

The event was about transgenderism and shared a name with his “What is a Woman” movie.

Students, staff and professors were left “angry,” “hurt” and “physically sick” at the thought of him coming to campus, based on complaints primarily filed before the event.

The documentary highlights the problems with gender ideology and was released by The Daily Wire and the conservative commentator (pictured) in 2022.

The October 24 event sparked protests and Dean of Students Christina Olstad released an official message through Instagram that condemned Walsh as “harmful.”

While graduate teaching assistant and law student Jesikah Leeper openly boasted about tearing down about 40 posters preventing the event and filing a bias report against it, others in the UW-Madison community were equally as upset.

I feel [the movie] is better described as a hate crime against women, especially transgender women in a video form. I believe by allowing YAF to host this event they are not only spreading hatred across campus, I think they are also in violation of a few RSO policies and will create a potentially unsafe environment, similar to similar events hosted at other universities.

This same student felt “physically sick” while researching the movie.

“Upon researching this ‘documentary’ I found a wealth of evidence that this has clear themes of transphobia, misogyny, racism, ableism, and ageism,” the student wrote. “It has created a great upset within lgbtq spaces on campus, many of us feel unsafe and frustrated that campus is allowing a RSO to put on this event.”

The complaint provided suggestions for campus policy violations, including the claim that the event violated the university’s promise to create “a safe and supportive environment.”

Another submission which appears to be from Leeper, the grad assistant, contains similar fears.

“Allowing for such a transphobic speaker to be present on campus with such a large platform shows queer, trans, and non-binary students, staff, and faculty that their experiences are not valid and their persons are not safe,” the complaint read.

While it does not say Leeper’s name, the details, time of submission and the similarly bent poster in the photo attached and the one she provided to the campus newspaper indicate it’s likely her complaint.

“I am angry and hurt that the community I love, which has a home here on the [the women and gender studies department floor], was so blatantly attacked,” she wrote.

The additional targeting of the department, a location known for its value and inclusion of queer, trans, and non-binary students should be understood as an intentional act of hate speech against them. The Young Americans for Freedom should be seriously reprimanded for their behavior including but not limited to revoking their permission to use the Great Hall.

“The speaker is known not only to target gender and sexual minorities as well as women; the YAF is known to intentionally inflame and draw a response from marginalized and feminist communities,” Enke wrote. “Trans* and nonbinary and queer people, trans* children.”

A graduate student also complained that Walsh mentioned Leeper during his speech, despite her name being out there publicly due to the grad assistant’s public boasting of her poster destruction.

“Matt Walsh called a teaching assistant out by name in front of the crowd, causing harm to that student,” the complaint stated. “They are being targeted by YAF and are now a subject in a national article that mentions their name and includes an image of them.”

“I don’t feel safe on campus anymore,” the complaint stated.

Notably, the campus YAF group also filed a complaint for the harassment against them by leftists, including from Leeper.

The group hit back on her claim that the conservative activists had torn down posters themselves, calling it “slanderous.”

“As a conservative student organization, our right to speech is constantly under attack and, as stated above, the University refuses to act in good faith to protect it,” the chapter wrote.

“Although our event was allowed to happen, the [university] released multiple statements calling our speaker ‘harmful’ and condemning our choice in who we bring to campus and by proxy, our speech.”

“They ‘affirmed and accepted’ trans students [publicly],” the complaint stated. However, the university has never publicly “affirmed or accepted conservative students.”