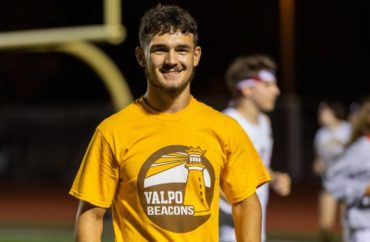 A Lutheran university in Indiana still does not have a new mascot, seven months after it decided to get rid of the “Crusaders” name.

Valparaiso University, located in the city of the same name, ditched the “Crusaders” in February because it had association with “hate groups.”

Though it settled on the “Beacons” as the new team name in August, it has not picked a new mascot.

VU Athletics Director Mark LaBarbera says a new mascot has not been decided yet. He says re-branding for a new mascot will take years, and references the current Crusaders branding, “There’s places where the mascot is very public. That logo is in the athletic facilities, so those are in the process of being changed,” the AD told the campus paper.

“One thing I tell people is there will not be a lighthouse with legs walking around,” LaBarbera told the Valpo Torch.

However, the university said that a new mascot could come in the next several months.

“This academic year a student-led committee will come together to inform the personification of a mascot, a character to hype up the crowd at Athletics games and embody the spirit of the Valpo Beacons,” Valpo wrote in a September 3 Facebook post. “And as the mascot for the Beacon nickname is developed over the next several months, we will be rolling out additional mascot-related imagery and gear!”

It said new gear and the “personification” of the team name would be unveiled this academic year.

‘So Valpo Beacons, stay engaged and excited — the Athletics ferocity and mascot personification is coming! Our Valpo family is the heart of this entire process and we cannot wait to see the passion brought to the mascot development,” the Facebook post said.

University officials did not respond several email requests for comment.

Opponents of the removal of the Crusaders were barred from commenting in February, but the Lutheran university has yet to remove comments on its announcement of the Beacons name. While some were supportive of the change, others criticized the change.

Some commented on an August 11 post announcing the change with a pledge to no longer donate.

“This is an embarrassment. Please remove me from your donation request list. Go Crusaders,” Lisa Gibbons wrote. Gibbons did not respond to a College Fix Facebook message sent in the past two weeks that asked her for further comment.

“Show my pride? I want to know how to return my degree after this embarrassing name! #fearthebacon,” Robert Gorincen wrote. He also did not respond to a Fix request for comment.