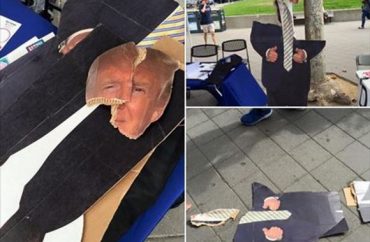 ‘It’s clear our safety is not a priority’

The Berkeley College Republicans’ life-size cardboard cutout of Donald Trump was ripped up by five bandits on Thursday in the middle of the quad, just one day after other campus protesters attempted to aggressively swipe the GOP’s sign.

The incident took place on Sproul Plaza as the Berkeley College Republicans and other various campus groups tabled in front of an administration building.

“David and I were tabling when five Hispanic males approached the table,” Pieter Sittler, internal vice president of Berkeley College Republicans, said in a statement to The College Fix.

“One asked how he could sign up, clearly not being serious, just as his four accomplices rushed the Donald Trump cutout, tore it to pieces, and yelled ‘f*ck Donald Trump.’ They of course then ran off like a bunch of cowards.”

Sittler said they have determined the vandals were Berkeley students.

On Wednesday, student protesters bum-rushed the Berkeley College Republicans’ tabling and tried to make off with their life-size Trump cutout.

“I think it’s saddening that this is what civil discourse has turned into. Just steps from Sather Gate, where 51 years ago Mario Savio marched through on behalf of the free speech movement, [our] property was damaged for exercising our free speech rights,” Sittler said. “If this is where our country is going in terms of freedom of speech and expression, I am pessimistic.”

David Craig, club treasurer, said the attack was “completely out of the blue.”

“I can appreciate a difference of opinion,” he said, “but violence for political ends is never acceptable.”

Claire Chiara, executive director of the group, said the latest incidents have “far surpassed the routine intolerance and suppression of diverse views on the UC Berkeley campus.”

“This week, we have seen institutionally supported denouncement of certain ideals expand to verbal accosting, assault, and destruction of property – all just feet from the administration building,” she said.

Asked how campus officials plan to protect the Berkeley College Republicans’ property from future attacks, campus spokesman Adam Ratliff only said “student organizing – whether for social, community, political or other interests – is an important part of student life at UC Berkeley and is an honored part of our traditions. We respect and support the UC Berkeley community’s first amendment right to free speech.” He referred questions of security to campus police.

Sittler said his group has no recourse as of now.

“We are going to attempt to work with the university to make some public announcement or denouncement of this behavior but thus far we’ve had communication with administration and they haven’t issued crime alerts to the student body, which they always do,” he said. “It’s clear our safety is not a priority, because discussing these attacks would go against their meme of a diverse and open campus climate.”