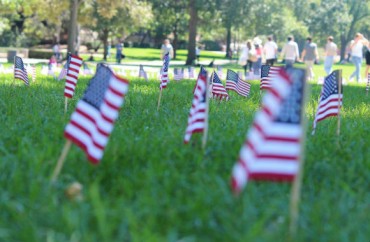 A commemorative display of American flags at Brandeis University to mark the 14th anniversary of the 9/11 terrorist attacks was uprooted and made to spell out “Proud of Iraq?” by vandals.

Brandeis Conservatives and Brandeis Democrats co-sponsored the memorial, and 2,977 flags – each representing someone who died in the attacks – were planted into the school’s Great Lawn on Sept. 11.

Around 4 p.m. that day, the display was rearranged to have the flags spell out: “Proud of Iraq?” A student who asked to remain anonymous provided a picture of the vandalism to The College Fix. “According to eyewitnesses and a post on the Facebook group Overseen at Brandeis, at around 4:00 pm on Friday several Brandeis students rearranged the flags to spell out the words, ‘Proud of Iraq?'” writes Dor Cohen, Brandeis Conservatives’ president, in the student newspaper The Justice.

In a statement on their Facebook page, Brandeis Conservatives condemned the act:

It has come to our attention that our flag display in remembrance of 9/11 was rearranged to spell out a political message. Such acts are unacceptable and ruined what for many was the opportunity to reflect over the tragic events that occurred 14 years ago. Today was supposed to be an apolitical, bipartisan display of unity in the face of terror, but the atmosphere has been ruined. Moreover, tampering with the display is a cowardly move that constitutes an insult to the memory of the three thousand Americans who died on 9/11. Tampering with a private display on a reserved Great Lawn is a violation of the Student Rights and Responsibilities handbook; we are taking the appropriate measures to look into the incident and disciplinary action will be taken against the perpetrator if their identity is found out.

Cohen, in an op-ed published Monday in The Justice, pointed out that while “everyone is entitled to their own opinion … the desecration of a memorial to one of the most trying days in American history is not only immensely disrespectful, but also insensitive to students who may have been personally affected by the attacks. The flippancy of the perpetrator, as well as their disrespect for the fallen in ruining the memorial is disconcerting.”