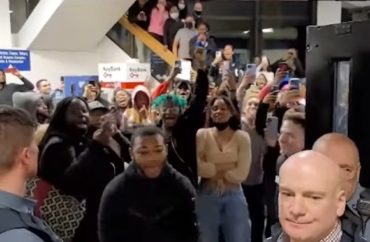 Chased a YAF leader through campus

Black Lives Matter activists at the University at Buffalo shut down an event with Allen West on Thursday. Police officers had to escort West out of the building due to the situation.

The campus Young Americans for Freedom chapter hosted West, who is black, for a speech titled “America is Not Racist.”

Students shouted popular BLM slogans like “Black Lives Matter” and “No justice, no peace” outside of the speech by West, a former U.S. Congressman.

During the Q&A, however, things turned hostile, according to YAF.

“The speech went on peacefully, but leftists attempted to take charge of the Q&A session––which is when the situation is devolved [sic],” Young America’s Foundation stated. “It became a tug-of-war with the microphone, as vitriolic leftists attempted to hijack the conversation and flung insults at West.”

“At many times throughout the night, I was legitimately worried about West’s and the students’ physical safety due to the angry mob berating and banging on the doors,” YAF Program Officer Gianna Milaro stated.

She had to call 911 to be escorted to safety. pic.twitter.com/oK8onZbmWM

“I am unbelievably disturbed that I was chased by a leftist mob and scared for my life on my college campus all for hosting Lt. Col. Allen West, a conservative speaker,” Purcell stated.

“I was aggressively chased by about 200 angry protesters and had to hide in a mens [sic] bathroom from screaming leftists who were searching for me,” the YAF chair stated. “The assault on free speech at University at Buffalo by an angry mob is incredibly unacceptable.”

Editor’s note: The headline and text were updated with the proper name for the university, University at Buffalo.