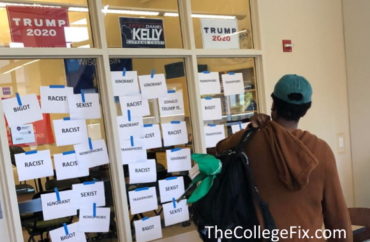 A student at the University of Wisconsin Madison recently posted a swarm of signs on the window of the College Republicans’ office with words such as “racist,” “sexist” and “bigot,” as well as two flyers stating “Donald Trump is.”

A video of the Wednesday incident, published on social media by the UW-Madison College Republicans, shows the black, female student posting the flyers as the rap song “Fuck Donald Trump” by YG & Nipsey Hussle plays over a speaker.

The signs covered almost the whole window into the College Republicans office, which has a Trump 2020 political sign on it, among other state-based pro-Republican imagery.

TODAY: intolerant student in complete hysteria targets UW-Madison College Republican student office. Another example of total intolerance from the left in an environment that is supposed to welcome a marketplace of ideas. *disclaimer contains explicit language* pic.twitter.com/qtSDA3SKri

The student was identified as senior Jasmine Kiah by the campus newspaper The Badger Herald, which reported that she said her actions simply made her feel better and that she planned to come back every day to do the same thing.

Ryan Christens, the chairman of the UW-Madison CRs, said that the incident occurred during the organization’s regularly scheduled office hours in their office in the student activity center. 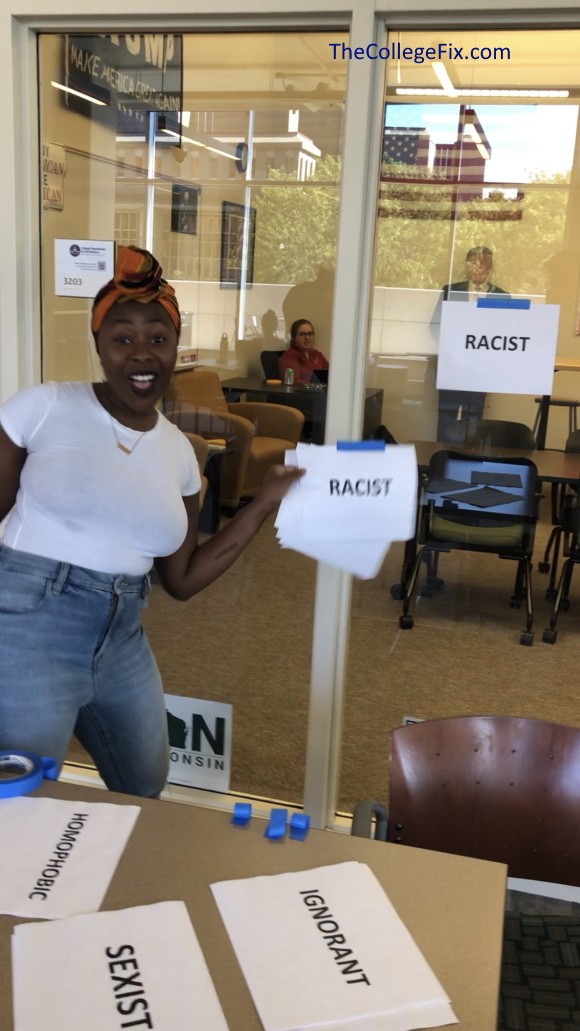 Christens, in an email to The College Fix, said that he approached the woman and introduced himself before asking her to stop putting up the flyers. He said Kiah replied “fuck that,” and told Christens “she would continue the demonstration every single day.”

It was not until a university staffer contacted the Dean of Students Office that the woman immediately left, according to Christens, who added that Kiah at one point commented “this white boy thinks he can stop me.”

The video available does not show the interaction between Christens and Kiah.

Christens told The Fix that the UW-Madison College Republicans have had students flash rude gestures in their direction before, but has never had anything occur quite like this, adding “we hope this is a one time incident.”

University spokeswoman Meredith McGlone told The College Fix in an email that the university is “aware of a Wednesday afternoon incident at the College Republicans Registered Student Organization office at the Student Activity Center,” and that the “Office of Student Conduct and Community Standards is reviewing the incident and will follow up as appropriate.”

“UW-Madison supports the free speech rights of its students along with civil discourse around political issues,” McGlone wrote. “The university’s policies prohibit the posting of unapproved signs, posters and other material in public spaces.”

Wisconsin state Sen. Roger Roth, the Senate president, has since weighed in on the controversy, which has been reported on by several regional news outlets.

“Someone did not watch the recent Ellen Show… I’m interested to see what more the UW will say and do about this,” he tweeted on Thursday.

MORE: UW-Madison spells out new rules for campus protests in wake of crackdown on disruptive demonstrations