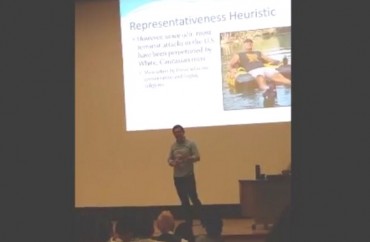 Most acts of terrorism in America are committed by white men who are “religiously motivated and politically conservative,” a psychology professor recently taught his students, adding that “9/11 is basically the only act of foreign-born terrorism that has ever happened in the United States.”

The “Introduction to Psychology” lesson was given by Dr. Ross Avilla, a lecturer at the University of California-Merced, who backed up his argument by telling his class about a white Christian man who shot up the Texas statehouse with an AK-47 – an incident which in fact never took place.

“Ninety percent [of U.S. terrorist attacks] are from these white Caucasian men,” Avilla told his class. “And by the way I am not saying white men are evil – but that is what we should be thinking about. Usually they are people who are religiously motivated and politically conservative.”

The psychology scholar couched his statements in a lesson on heuristics, defined “as a mental shortcut that allows people to solve problems and make judgments quickly.” He essentially argued many Americans wrongly believe Muslims make up the vast majority of U.S. terrorists because they have not thought long and hard on the matter.

A portion of the lecture was recorded by two students in the class who provided it to The College Fix. The lesson took place in mid-October, just a few weeks before UC Merced student Faisal Mohammad stabbed four people on the Northern California campus.

After his rampage, Mohammad was found to have an image of the ISIS flag, a handwritten manifesto with instructions on how to behead someone, and reminders to pray to Allah, but authorities have said his motives were grounded in revenge for being kicked out of a study group.

Two students in the class who provided the video of the lecture to The College Fix last week asked to remain anonymous. They said they waited to release it until their grades were secured, and also out of respect for the mourning period at UC Merced after Mohammad’s stabbing spree.

A lecture slide accompanying the lesson (shown below) stated: “However, since 9/11, most terrorist attacks in the U.S. have been perpetrated by White, Caucasian men. Most often by those who are conservative and highly religious. And yet, a 2015 poll found 27% of Americans believe that ‘most Muslims wish to commit terrorism against the U.S.'” The scholar made the statements to his class of about 250 students, mostly freshmen.

“They are students who are impressionable,” one of the students who provided the video told The College Fix, adding “I wanted to learn about psychology. I didn’t want to hear biased politics.”

The other student said they thought the lesson was biased as well.

“I think it shows the absurdity of how progressives will try to label their opponents or anyone remotely right of center as someone who wants to topple the government through acts of terrorism, and ignore leftist anti-government terrorists such as Bill Ayers,” the student said.

During the lesson, Avilla told the class: “Just a few months ago, a white, I think he was Christian, I thought he was Christian because there was something about, you know, ‘the state claimed against God’s law and stuff,’ so a white guy went in with an AK-47 and shot up the statehouse in Texas. Like literally fired 60 rounds at the statehouse. No one was injured but that is an act of terrorism. That happened about a month ago.”

“Now imagine if that guy was a Muslim,” Avilla added. “If a Muslim came in with an AK-47 and shot at a statehouse in Texas – how many of ya’ll would hear about it then? Everyone. It would be all that was on the news.”

Asked about the content of his lecture by The College Fix, Avilla said in an email he actually meant a heavily armed man who stormed the Forsyth County Courthouse in Georgia in 2014.

“I had gotten quite a few of the details wrong (which I do regret),” Avilla said, adding video of the incident had been released in the summer of 2015, when he learned of it.

“It came off the top of my head and was simply meant to illustrate the point that non-Muslim terrorist attacks do happen regularly and often aren’t covered by the major news outlets,” he said, adding media coverage of “non-Muslim terrorists” has increased more recently, citing the Charleston church and Colorado Planned Parenthood shootings and the “hostile take-over” of the Malheur National Wildlife Refuge Building in Oregon.

According to reports, no one died at the Forsyth courthouse shooting except the gunman, Dennis Ronald Marx, who was facing numerous federal gun and drug-related charges. Some reports described him as a “sovereign citizen” who was anti-law enforcement and anti-government.

Meanwhile, Avilla stands behind his assertion that nearly all acts of terrorism in America are committed by white men who are “religiously motivated and politically conservative.”

“As far as that specific lecture goes, it was on heuristics (mental shortcuts that can cause misperceptions),” Avilla said in his email. “A common heuristic about terrorists is that they are most often Muslim. I wanted to show the class that this was not the case.”

He cited these studies to back up his claim.

As for the timing of the lecture, Avilla said he would not have discussed the topic if it had followed soon after the stabbing, “as this may have been traumatizing to some of the students.”

“After the school stabbing took place, I made sure to exclude anything from my lectures that could have triggered memories of the school stabbing,” he said. “I also spent time in class discussing the tragedy with students, helping to answer their questions about it and offering information on how to get psychological services if they need it. I care tremendously about my students and their personal well-being.”