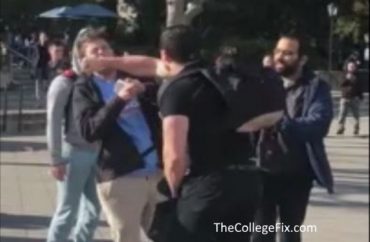 A conservative activist was verbally and physically assaulted on UC Berkeley’s campus by an individual who apparently became enraged by his “Hate crime hoaxes hurt real victims” and “This is MAGA Country” posters.

Roughly 60 seconds of video obtained Thursday by The College Fix shows one angry man saying “you are fucking encouraging violence.” Another man comes up and calls him a “racist motherfucker” and tells him he would “shoot his ass.” They tussled for a bit, with the conservative activist, Hayden Williams, appearing to try to defend himself as the man comes at him, batting at his face and phone.

He then punched Williams in the face with a haymaker and calls him “fucking cunt” as he walks away.

The university sent an email to the campus community notifying them of the attack and asking for information to help in identifying the perpetrator. There is no clear evidence at this time that the attacker is a UC Berkeley student, although he was wearing a backpack and appears college-aged.

Williams is not a UC Berkeley student. He is a field representative for the Virginia-based Leadership Institute, which trains young conservatives and publishes Campus Reform. But Williams was at Berkeley that day at the behest of Turning Point USA, another conservative campus activism group, to help recruit new members.

Williams was tabling for the student club around 3:30 Tuesday afternoon when he was approached by the two individuals. It appears the individuals took issue with two signs displayed on the table that referenced the recent Jussie Smollett hate crime hoax. One read, “Hate crime hoaxes hurt real victims,” and another read, “This is MAGA Country.” 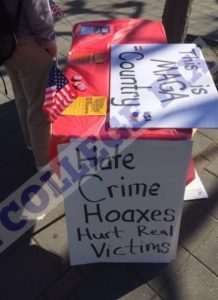 It is not clear if the individuals were together.

Williams pulled out his cell phone to record the incident. His video shows the first individual in a grey hooded sweatshirt accosting him. Williams informs the individual that he is recording the incident because the aggressor seemed agitated.

“You are fucking encouraging violence,” the man tells him, gesturing to the table and the signs.

He begins to walk away. Williams is then pushed by another perpetrator wearing a black t-shirt and he drops the phone. “Get that phone out of my face motherfucker,” the perpetrator says. He proceeds to threaten to shoot Williams.

Another angle of the incident shows the perpetrator and Williams tussling, and then the perpetrator punching him in the face before walking off and yelling more obscenities at him.

In an email to The College Fix, UC Berkeley spokesman Dan Mogulof wrote that the university “strongly condemns violence and harassment of any sort, for any reason.”

“That sort of behavior is reprehensible and intolerable,” he wrote, continuing that the university has an “unwavering” commitment to free expression.

“At this point we have no information indicating that the perpetrators are affiliated with the university,” he added. “If it is determined that students were involved we will not hesitate to impose serious consequences as per our student conduct process and, if warranted, the criminal justice system.”

Carol Christ, chancellor of UC Berkeley, sent out a message to the campus community Thursday afternoon as well.

“At this point we have no information indicating that the perpetrators are affiliated with the university, and I join our police department in urging anyone with information about the incident to come forward so we can apprehend and bring the perpetrator to justice,” the message read, in part.

Williams told The College Fix in a phone interview that the incident “isn’t surprising.”

“This isn’t a campus that’s sympathetic to right-wing perspectives, that’s a well-known fact,” he said.

He also added: “I don’t think anybody expects the university to pursue this investigation with any sort of vigor, although I appreciate the vocal condemnation of the violence.”

CORRECTION: This story has been updated to include the victim’s name and to correct that he is not a student at the school. It has also been corrected to note Williams gave comments to The Fix.