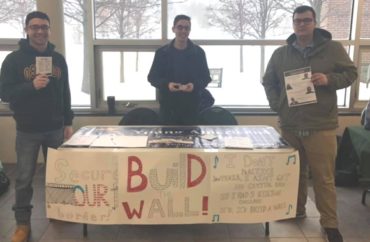 A group of conservative students at SUNY Oswego who hosted a “Build The Wall” campus display Tuesday were hit with a barrage of violent messages on social media that included slurs, expletives — and even death threats that talked about shooting, jumping and greasing them.

The reaction to the Young Americans for Freedom display was so intense that campus officials denounced the messages, launched a police investigation, and reminded students about free speech rights.

Tyler Toomey, chairman of the YAF chapter at the New York-based public university, said his group is working with campus police to hold those who sent the messages accountable.

“Threats of violence against students should not be tolerated regardless of their political view. We are disgusted that our peers are threatening violence against members of our organization,” Toomey told The College Fix via email Wednesday.

The table was set up around 10 a.m. and taken down around 4 p.m. in the Marano Campus Center with full permission from campus officials. It included phrases such as “Build The Wall,” “Secure Our Border,” and a play on a popular Sublime song that read: “I don’t practice Santeria, I ain’t got no crystal ball, if I had 5 billion dollars I’d, I’d build a wall.”

“We had several great discussions with passing by students and we were only treated to dirty looks in terms of negativity at the table,” Toomey said. “After the event, social media blew up into a storm of bullying harassment and then turned to violent threats of shooting, jumping, and ‘greasing’ our members. To make matters worse, soon after, these offenders targeted our direct messages with their threats of violence.”

Toomey provided screenshots of some of the messages to The College Fix. 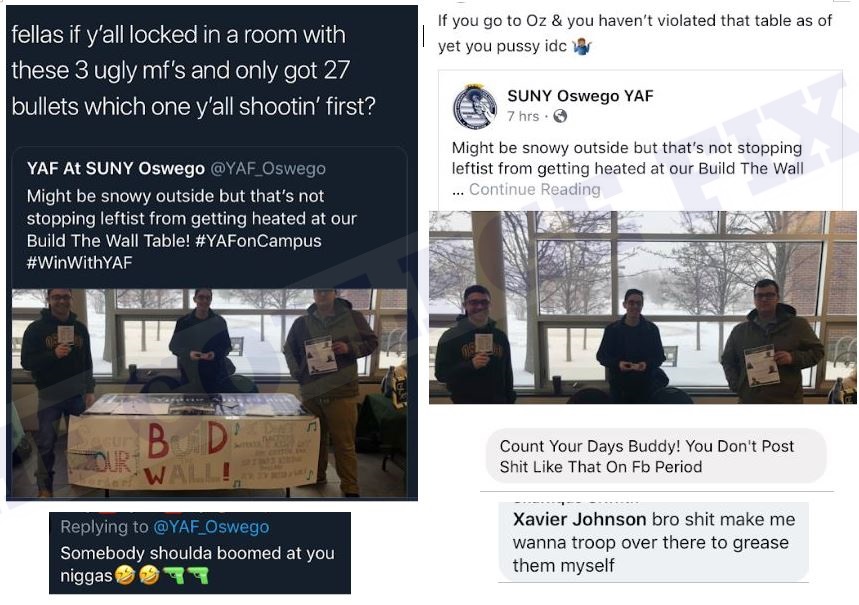 “Yet again we see the supposedly ‘tolerant’ Left betraying its hypocrisy by resorting to threats of violence directed at YAF students for their bold activism,” he told The College Fix via email Wednesday. “If leftists had any confidence in their principles they wouldn’t need to call for the violent death of conservative students in this disgusting attempt to intimidate them into remaining silent.”

In a statement to the campus community, President Deborah Stanley addressed the controversy.

“Yesterday, several violent threats were posted on social media against a properly recognized student organization and its members who were appropriately permitted to table in Marano Campus Center. University Police immediately opened an investigation and requested information from the social media host site. The site took down the posted threats and suspended the accounts. The on campus investigation continues. Violent threats will not be tolerated and are not protected by freedom of speech. We will pursue offenders as soon as we become aware of threats of violence or other criminal acts,” she said.

“The principles of free speech and expression are fundamental to an open society. As an academic community, we know that the building blocks of learning are based on the quest for information and analysis in the context of open inquiry, skepticism and debate. While some ideas and opinions are vastly different from our own and may be anathema to what we think and believe, I strongly encourage all students, faculty and staff who wish to rebut expressions of others to use their words and voices to add their experiences and understandings to the public ‘marketplace of ideas’ that is the soul of SUNY Oswego. An ill-tempered and threatening response may very well bolster those ideas you wish to debunk and make you subject to judicial proceedings,” she added.