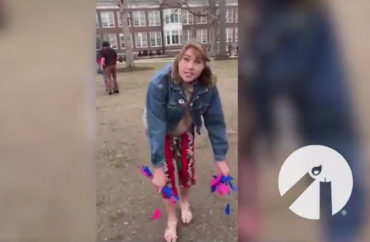 ‘Seeing these flags is traumatic’

The LGBTQ group PRISM at The College of New Jersey takes no institutional position on abortion or the pro-life memorials that represent aborted babies.

But its spelling-challenged vice president, Courtney Woods, cares so much about the issue that she physically ripped out the flags in the “Graveyard of the Innocent” display set up by the campus Students for Life chapter, according to Students for Life of America.

The campus chapter captured video of Woods and others who “appear to be members” of PRISM vandalizing the display on Thursday (below) and then talking about “going to the PRISM center to retrieve flags to counter-protest another, unrelated group that was on campus,” SFLA said in an email blast Monday.

“This is a graveyard for kids! Don’t you realize what you’re doing?” a Students for Life member yells at the vandals. They respond “They’re not kids, they’re fetuses,” and “It’s a couple of flags for some cells that got flushed out.”

Another vandal approaches the camera while pulling out flags: “There are people on this campus who have gone through this experience. And seeing these flags is traumatic.”

Woods, the PRISM vice president, enters the video after all but a few of the flags have been torn out. She throws a few on the ground.

“What should we do with the flags?” one vandal asks. A voice offscreen says “I don’t know,” and the camera pans to Woods. A male voice suggests throwing them in a trash can, and the SFL member warns them “that would be theft.”

The vandals agree to leave the flags, and one of them addresses Woods, apparently to ask permission to “take down the PRISM, the gay flag and protest it over there.” It’s not clear what she means, but Woods responds “Yeah, go ahead.” (The manually added captions are incomplete in this portion of the video).

“Is there someone in the PRISM Center?” another unidentified voice asks, and while walking away, Woods (below) yells “yes.” 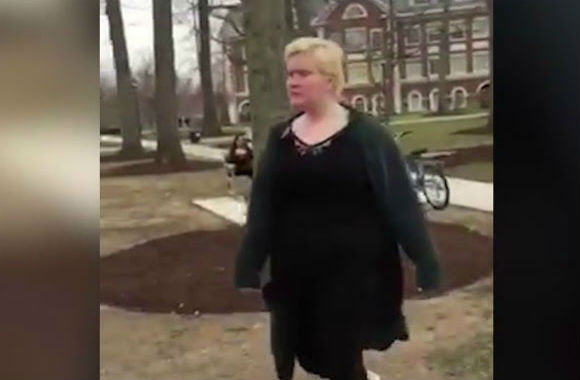 The vandal who told the SFL member that the flags were “traumatic” tells him at the end “we’ll take them out again” if the pro-life students replant the graveyard.

SFLA said on Facebook the police “will be investigating” the vandals, and mocked them for showing their faces and “saying the names of other groups you are part of.”

In the email blast Monday, SFL chapter Vice President Grace Gottschling said “there were at least six attempts of vandalism that we know of” against the display in less than 24 hours.

SFLA noted the “irony” of “many of these same students” putting up a similar flag display the next day (below) that defends “the right to choose, to love, to protest” and concludes “Hate has no home at TCNJ.” The university removed this display because the SFL chapter had reserved the space for both days, according to SFLA. 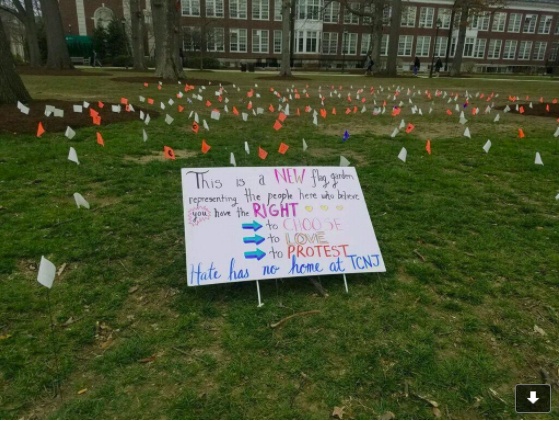 There was also Twitter conversation about the vandalism, with one apparent TCNJ student suggesting Wednesday “let’s steal the flags and plant flowers.” That tweet is no longer on her Twitter profile, but SFLA took a screenshot.

The president of PRISM, Andrew Fenwick, told SFLA that the vandalism “disheartens me” but distanced the group from “the actions of this individual PRISM member,” apparently referring to Woods, a member of its seven-person executive board (below). He said the vandalism was not “in any way encouraged or planned by PRISM.”

The university confirmed the SFL chapter had permission from Student Affairs to set up the display, and said it will have a “formal discussion with all parties involved to determine what next steps are appropriate,” according to SFLA. It said the chapter will meet with the dean of students and director of student conduct this week.