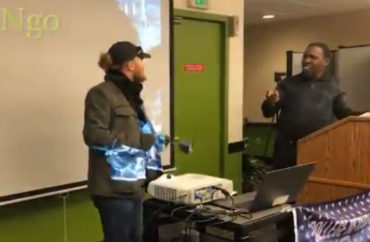 Conservative speech at Portland State University will not be protected by campus officials or even police, if an incident Tuesday night is any indication.

In videos recorded by former College Fix writer Andy Ngo, an “anarchist antifa disruptor” continuously rang a handheld bell in order to shut down a College Republicans event and harass their invited speaker as he tried to salvage his presentation.

Michael Strickland had planned to talk about “his conviction related to him brandishing a gun at a mob who surrounded him” at a Black Lives Matter protest in 2016, according to Ngo. He said he witnessed that incident: “I saw angry protesters w/sticks surround & move him out of the BLM protest before he brandished his pistol.”

The disruptor jangles a bell while another protester off-screen chants “Black Lives Matter!” The bell-ringer shouts “Fuck you, Michael!” while flipping off the speaker as an unidentified person motions for him to leave.

Other unidentified older men simply follow the bell-ringer as he moves around the room. A few are filming the action, reminiscent of the Black Mirror episode “White Bear.”

Uniformed police don’t intervene, except at one point where an older black man and younger white man get in each other’s faces. According to Ngo, police and administrators said they couldn’t do anything.

One anarchist antifa disruptor with a bell was able to shut down the Michael Strickland @Portland_State College Republicans speech as soon as the event began. Campus police & admin were there but just stood & watched. They said they couldn't do anything about the disrupter. pic.twitter.com/fSpuEjm8aQ

The bell-ringer then blocks the screen where Strickland is trying to give a presentation. When he stops ringing the bell, he starts yelling “What?” and yipping as Strickland tries to speak.

The disruptor then starts an impromptu filibuster. “You seem like the kind of guy who carries typhus in his fingertips,” the disruptor tells Strickland when he offers a bottle of water. “You’re absolutely disgusting.” It gets cruder from there.

The disruptor also accused Strickland of inciting supporters to attack transgender people on campus the last time he visited. “I don’t believe I’ve ever spoken on campus,” Strickland responds. The disruptor admits he made it up.

According to Ngo, “this continued for more than an hour,” uninterrupted by police.

The bell-ringer continued his antics while Strickland tried to speak to a video live-stream. According to Ngo, the university “has no policies in place to deal w/disruptions at student-organized events” and police only respond to “violence or property destruction.”

Ngo said flyers for Black Lives Matter and “open borders” were posted around campus after the event.

The timing of the disruption is auspicious: On Thursday the board of trustees will hear from a law firm commissioned by PSU to make “campus safety” recommendations. The meeting is open to the public. (PSU tweeted yesterday afternoon that students “may have been videotaped or photographed in restrooms.”)

The PSU community's safety and privacy is our top priority. Our Campus Public Safety Office has increased its presence in PSU buildings where students may have been videotaped or photographed in restrooms. Please call CPSO with info at 503-725-4407. https://t.co/Fhrnbag2br

PSU did not publicly acknowledge the antifa incident until late Thursday, when it tweeted a statement on its Facebook page.

Three hours earlier, The College Fix received two emails 10 minutes apart from different spokespeople with the same statement, in response to a Fix request Wednesday for comment on Ngo’s videos and description of inaction by administrators and police.

“Due to the nature of the event advocating gun rights, a Campus Public Safety officer monitored the event to ensure the safety of participants,” the statement reads. “When an individual disrupted the event by ringing a cowbell, the officer used his professional judgment and determined not to threaten or restrain the individual so as not to escalate a potentially unsafe situation.”

Campus facilities management let the College Republicans extend their event “beyond the scheduled end time that night because of the disruption delay,” the university said. The statement does not say how long the delay was.

The Fix also received an email Thursday purportedly from Strickland that accused police of refusing to enforce Oregon law on disorderly conduct and harassment. He posted a video from a different angle than Ngo’s and asked viewers to contact President Rahmat Shoureshi and the campus safety office.

“Several attendees tried to filed [sic] reports with campus police and security but the officers refused to take any reports,” Strickland wrote. The Fix has asked the administration to respond.

UPDATE: Portland State responded to a Fix request for comment on Ngo’s videos and characterizations on Thursday. Its statement, also posted publicly, has been added. The Fix also received an email purportedly from Strickland, portions of which have been added.