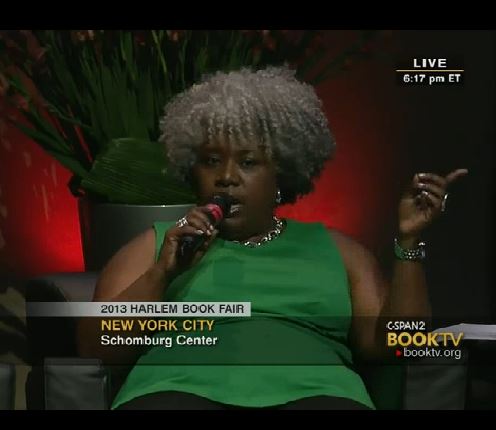 University of Pennsylvania associate professor of religious studies Anthea Butler, who infamously called God a “white racist” after George Zimmerman was found not guilty, made another round of controversial statements over the weekend, saying she can’t get fired thanks to tenure and that she was “coming after the god they worship … white supremacy.”

The Ivy League professor made her comments while serving Saturday on a panel at the Harlem Book Fair, which CSPAN filmed and posted online.

The panel, called “The New Jerusalem: Black Life, The Church, and the Struggle for American Democracy,” was focused on religion, political activism and the “black church,” and included several African-American pastors, scholars and authors.

Forty minutes into the nearly 90-minute panel, Butler – who described herself as a “progressive Christian,” cited the recent controversy and the sharp criticisms it generated:

I got attacked by the right.  I got attacked by Fox, Sean Hannity, Rush Limbaugh — I’m saying all you all’s names out loud — Daily Caller. All of them, they came at me this week. I didn’t have no church people to clean up my Twitter feed.  These people call me the B, the C, everything else they could call me except a child of God. Okay?  And why did they do that?  Because I had the nerve to critique this American god. Small G now. Not big G. But they like, ‘Oh, no! You comin’ after God!’

And for the people that e-mailed … to try and get me off this panel: I hope you enjoyed the show.

Rush Limbaugh, who aired her comments Monday, said during his show in response to being called out by Butler that after a detailed search his staff could find no proof of her being called a “B” or “C” word, adding: “Anyway, this woman, she’s just as most liberals are, just filled with rage and anger.”

Limbaugh went on to note:

It’s impossible for her to be happy. She’s gotta corrupt. She’s gotta pollute. She has to twist minds. She has to revise history to make her feel worthwhile, I guess.  She went on to say that all of us white racists out there, we misunderstood what she was attacking. She was just attacking our god, not the God.  She was just attacking the god of all the white racists out there. And there’s nothing we can do about it ’cause she’s got tenure. Here’s the last sound bite, Anthea Butler, professorette at the University of Pennsylvania, or whatever they call it. …

You know, I never heard of this, the god of racism? Have you ever heard of Mammon? Do you know what that is? Snerdley, what is Mammon? The god of Mammon is the god of white racism? And that’s who we supposedly worship. All we did was react to what this professor said in her rage and her anger. But then she flips everybody off: you can’t do anything about it because I have tenure. Mammon is material wealth or greed.  Mammon is personified as a deity, the god of wealth and greed and so forth. Never heard of it. Anyway, I don’t know how much you spend to send your kids to this school, but it’s a waste of money if your kid’s taking a course taught by this woman.

Click here to read more from Limbaugh on the subject.

Click here to watch a video of the panel discussion during which Butler made her recent comments.