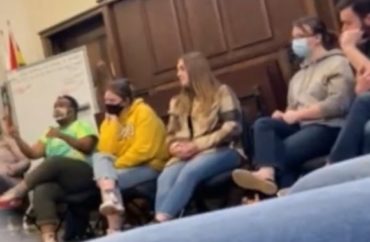 Administrators with the University of Wisconsin-Superior’s Gender Equity Resource Center held a strategy session ahead of a conservative commentator’s speech, according to video obtained by Young America’s Foundation.

Officials can be seen on video with students figuring out if they can move Matt Walsh’s event off of campus. Walsh is a commentator with the Daily Wire and regularly speaks about topics such as abortion and gender ideology.

Another administrator asks students for any questions they have about their protest plans and gives them tips on how to have a peaceful protest.

“One administrator encourages protestors to ‘sit down’ if there are threats against them, to draw a scene and cause police to come and assist,” YAF reported.

“This has become one of the most exhausting experiences of my entire life,” one student says about @MattWalshBlog coming to campus.

“These actions reflect that you want hatred,” he told an administrator for allowing Walsh to speak. pic.twitter.com/HaPA6O8ZSw

“This has become one of the most exhausting experiences of my entire life,” a student told administrators. “It is exhausting,” the student says, after he said he would rather pay “thousands of dollars” to go to another school instead of being at a campus that allows Walsh.

“It is exhausting, with racism, homophobia, transphobia, and nobody cares,” the student said. He said that while the university “genuinely…want[s] to block hatred toward the students here, but these actions reflect that you want hatred.”

“And we will continue feeling marginalized on this campus,” he said.

Another student said they have been “misgendered” and the experience has been “exhausting” and “devastating.”

“I would rather just have a safe space,” the student said.

“Actions speak louder than words,” another student told the administrators.

.@Mattwalshblog has some fans here in Wisconsin:

“You shouldn’t be proud to be a staff member at this event.”

Me: “do you even know what organization I work for?”

Lib: “You should be ashamed for working for a F*CKING FASCIST” pic.twitter.com/dI1PrUU2Bo

The event on Wednesday appeared to draw a full crowd with minimal protests outside.