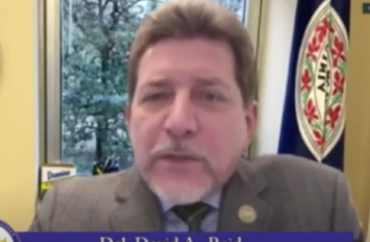 Budget analysts say they cannot figure out the cost yet

Democratic Virginia Delegate David Reid has introduced legislation, passed by the House of Delegates, which would require some public universities to provide reparations to ancestors of slaves who worked at the universities.

The public universities would need to “annually identify and memorialize, to the extent possible, all enslaved individuals who labored on former and current institutionally controlled grounds and property.”

University officials would have to “provide a tangible benefit such as college scholarship or community-based economic development program for individuals or specific communities with a demonstrated historic connection to slavery that will empower families to be lifted out of the cycle of poverty.”

The College Fix reached out to Reid’s office twice via email asking for information on how universities would identify the descendants of slaves and for cost information on the program. Reid’s office did not respond to requests for comment in the past two weeks. Tuition increases and “state funds’ cannot be used to fund the program, according to the legislation.

A “fiscal impact” analysis by the legislature found that there was insufficient information to calculate the costs. The budget analysis said “the actual effect is indeterminate until the State Council of Higher Education for Virginia (SCHEV) develops guidelines for implementation.”

Universities say they are already working to rectify past actions

The College Fix reached out to the universities that would be affected by this legislation. Two said they are already working to rectify their roles in slavery.

“It is important to note VCU has been working hard to examine and address its historical treatment of African Americans and its relationship with the African American community,” Michael Porter, a spokesperson for Virginia Commonwealth University told The Fix via email. He said the university does not comment on pending legislation.

University officials have worked in the past years to properly bury human remains that were discovered in 1994. “These humans, mainly of African descent, were not shown the respect they were due, neither in life nor in death and this effort is meant to rectify that,” Porter said about the East Marshall Street Well Project.

He also said that the university’s trustees voted in September to “de-commemorate buildings named for Confederates.”

The College of William and Mary shared similar comments.

“I can tell you that William & Mary continues to be dedicated to telling a fuller, more consequential account of our history,” Suzanne Clavet, a university spokesperson, told The College Fix via email. It does not generally comment on pending legislation, Clavet said.

She shared a link to the university’s Lemon Project, which includes an apology and a memorial for the university’s role in slavery. “[W]e have identified 188 enslaved individuals who labored at W&M but that important research continues,” Clavet said.

“VMI does not comment on pending legislation,” Bill Wyatt, the military university’s spokesperson told The College Fix via email when asked for comments on the legislation.

Brown reiterated that the request for comment had been shared with a colleague on March 11, but The Fix has yet to receive a response.