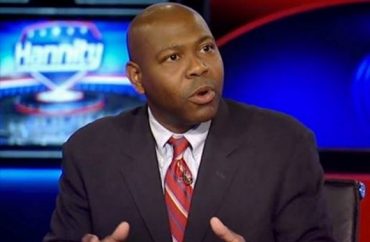 The latest as of Thursday afternoon is that Jason Riley will speak at Virginia Tech after all.

As the president of Virginia Tech, I want to share with you our commitment to free speech and civil discourse. We continue to welcome speakers to campus with diverse and controversial opinions that help us test our assumptions and broaden our perspectives. We owe this to our students who will be living and working in an increasingly complex world.

As you may have heard, a faculty committee charged with making a recommendation for a Fall 2016 speaker made a selection from a pool of potential speakers and that invitation was accepted. We learned subsequently that a faculty member, without the knowledge of the committee or the authority to do so, had extended an invitation to speak in that same slot to Jason Riley. We have since apologized to Jason Riley for this error in judgment, and Dean Sumichrast has invited him to speak at Virginia Tech. We regret the confusion and assure our friends, parents, students, alumni and partners that we will take the actions necessary to ensure that such miscommunication does not occur in the future.

So all’s well that ends well. Below is what led up to Sands’ decision …

Is Virginia Tech going to deny, defend or retract its decision to disinvite Jason Riley, a senior fellow at the Manhattan Institute and a columnist for The Wall Street Journal, from a planned campus speaking engagement?

Emails Wednesday by The College Fix to a Virginia Tech spokesman went unanswered. Oddly, when the story first broke, the university’s Twitter account had something to say about the development:

“If there was a formal invitation extended to @jasonrileywsj, it will not be rescinded. Investigating.”

Hhhmmm, a “formal invitation?” A game of semantics. The speaking engagement was slated for this fall and had yet to be formalized. But the invite had definitely gone out.

If the university is trying to find a loophole, it’s tenuous at best.

In response, National Association of Scholars President Peter Wood fired back with a copy of the actual email in which Riley was invited to give the speech, and suggested the dean’s response was a “bold effort to rewrite history.”

Added Wood: “Your letter to the members of the Virginia Tech Community is sad testimony to the ethics that apparently prevail at the highest levels of the Pamplin College of Business as well as the administration of Virginia Tech.  You know full well that in every meaningful sense Mr. Riley was invited.  But to save face, you have made yourself party to a fiction that the invitation was invalid.  And in your letter you add the touch of quoting from your university’s ‘Principles of Community,’ to the effect that you ‘encourage open expression within a climate of civility, sensitivity, and mutual respect.’”

Upon request, the National Association of Scholars provided The College Fix a copy of the email in which Riley was given the heave-ho. It’s written by a clearly frustrated professor who is sick and tired of establishment scholars (hey, can we coin that term?) winning the day at his place of work.

The department head has decided that I cannot formalize my offer for you to give the BB&T Distinguished Lecture. The problem is not the honorarium, but rather he is afraid there could be protests over your appearance on campus. Please bear with me as I try and explain.

On March 25 Charles Murray gave the lecture. When this was announced in the student newspaper all heck broke loose. Why? Because in 1994 he and Richard Herrnstein published the “Bell Curve.” Tim Sands, the president of Virginia Tech, embarrassed himself and the university with an open letter to the university community where he claimed that Murray’s work had been discredited—no mention of Herrnstein, no facts or references to the book. I’m sure Sands has never read the book, so he had no reason to make such a statement. It’s my guess that he was put up to it by one of his “diversity” assistants. As it turns out, I purchased and read the entire book back in 1994, so I know the president’s claim was a cheap smear of a prominent scholar.

Below is the link to Sands’ open letter:
http://vtnews.vt.edu/articles/2016/03/president-letterprinciples.html#.VyObX0KE4j4.email

Charles Murray heard about the kerfuffle and wrote his own open letter to the Tech community which was published on the front page of the “Collegiate Times,” the student newspaper.

Next came the organization of a protest by the campus looney left, complete with tee shirts saying “I am not Inferior.” Two days before the lecture I attended a “Teach In” with the dean of the college of business. This turned out to be an ugly, hate-filled two hour attack on Charles Murray, complete with charges that he is a racist, was or is a member of the Ku-Klux-Klan, that he supports eugenics, and that the Koch brothers are behind the BB&T lecture series, and so on. (These supposedly educated people were not aware that Woodrow Wilson, a pioneer of the progressive movement, favored eugenics).The reality of the “Teach In” was an organized attack on free speech.

There was talk of cancelling Murray’s appearance, but cooler heads prevailed, and we went ahead with the lecture with police security protection. The protestors were not allowed near the door to the ballroom where the lecture took place. Carry-in bags and briefcases were inspected by additional security personnel. The event went of smoothly although attendance was lower than expected because of the protest and the fact the dean of the business school would not allow me to promote the lecture with posters or class announcements.

The BB&T lecture series is supported by private grant money. A counter lecture was organized and took place immediately after the Murray lecture. The speaker was someone by the name of Dr. Jason E. Glenn of the University of Texas Medical Branch. The title of the lecture was “Neoliberalism, Class Warfare, and the Enduring Allure of Biogenic Determinism.” I note that this lecture was funded by public money.

Next we come to the Jason Riley invitation. When I told the department head that I wanted to invite you he didn’t say much one way or the other. Later, he learned that you have written about race issues in the WSJ. He and others in my department are worried about more protests from the looney left if you were to give the lecture. I explained that if we allow ourselves to be intimidated by these people they win, and we lose. It was no use arguing, their minds were made up. Fear of a possible protest is more important than free speech or the values that a university is supposed to stand for.

Basically, if a left-leaning scholar had been invited, there would have been no disinvitation. One would think a campus dominated by the “looney left” would allow just one conservative voice to offer a dissenting opinion. But the “looney left” (another term worth coining) is militant — despite their calls for diversity and inclusion.

In fact, Riley has spoken at dozens of colleges over the years. Here’s Mr. Riley — author of Please Stop Helping Us: How Liberals Make It Harder for Blacks to Succeed — in his own words in The Wall Street Journal about the disinvitation:

Students who disagree with my lectures don’t hesitate to speak out during the Q&A. The back-and-forth is spirited but civil, and I have never been shouted down or physically threatened.

Still, a disinvitation at some point may have been inevitable. The Foundation for Individual Rights in Education (FIRE), which fights campus censorship, has compiled a “disinvitation database” that dates to 2000 and today includes nearly 300 incidents. According to FIRE, the “number of ‘disinvitation incidents’—i.e., efforts to prevent invited speakers from conveying their message on campus—has risen dramatically.”

I’ve lost count of the times I’ve been approached by conservative students after a lecture to a mostly liberal audience and thanked, almost surreptitiously, for coming to speak. They often offer an explanation for their relative silence during question periods when liberal students and faculty are firing away. “Being too outspoken would just make it more difficult,” a Wellesley student once told me. “You get to leave when you’re done. We have to live with these people until we graduate.”

The disinvitation problem is one symptom of a larger disease eating away at the heart of higher education. And the patient? America itself.