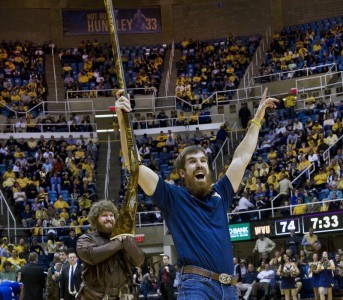 He wears a coonskin cap and carries a musket. He is a symbol of the rugged spirit that founded the great state of West Virginia. He’s got a thick, brown beard and he loves to hunt.

Say hello to Jonathan Kimble, a graduate student at West Virginia University and currently the school’s official “Mountaineer” mascot, described by school officials as “an emblem of pride, passion, and courage.”

“He represents West Virginia as much as WVU,” the school’s website declares. “He is a symbol of the rugged Mountaineer spirit that lives in all of us who call—or have called—these mountains home.”

Except, of course, if he actually embodies that rugged spirit and goes hunting with his official mascot musket. Then, he’s an embarrassment to the college community, a blood-thirsty savage.

Yes, Kimble – an avid hunter – shot a black bear with his “Mountaineer” school-issued rifle, and after an image of the kill went viral, headlines blared, hand-wringing ensued, and the outdoorsman apologized.

“I know other Mountaineers have gone hunting with it – to kill deer and stuff, but it’s probably just better to keep it to appearances,” Kimble told The Daily Athenaeum, the university’s student newspaper. “I’ve been hunting all my life. It’s part of the culture of West Virginia – living off the land. People can find offense to certain things in that, though.”

Quoted in the Associated Press, Kimble said he’s sorry, that “hunting can be a controversial topic. I apologize to any of those who took offense to the video. It definitely wasn’t my intent to offend anybody.”

The Daily Athenaeum noted that after a “conversation” with administrators, Kimble agreed it was probably best not to use the school’s rifle to hunt, a decision the campus newspaper supported in an editorial:

“In response to this incident, the university issued a statement asserting that Kimble’s use of the Mountaineer rifle to hunt was in no way illegal or in breach of any university rules, but that he would no longer be using it to hunt.

That’s probably for the best. Although there is nothing illegal about what Kimble did, he should know better than to film himself shooting a bear and celebrating excessively, then posting it all on YouTube for the world to see. The university and the state of West Virginia have enough of a perception problem, and incidents like these just feed negative stereotypes about the Mountain State. With the inevitable avalanche of bad PR coming West Virginia’s way with MTV’s ridiculous ‘Buckwild,’ Kimble should be conscious of the consequences his actions have beyond the university and even the state.”

But not everyone agrees with that assessment. Some students defended Kimble in comments posted online on the student newspaper’s website.

Student Matthew Thompson asked “why is hunting a negative stereotype for West Virginia?”

“The bear was not a cub and was definitely large enough to be fair game,” Thompson stated. “Jonathan has already said he will eat the meat and make bear jerky (we all know how popular his deer jerky has become) and will use the hide. The bear population in WV has gotten out of hand. Hunting is perfectly legal, and no university rules were broken. One may argue that the celebration was excessive, but hunting is exciting. Go out and kill a black bear and see if you don’t get excited about it, too. I don’t understand the backlash over this, and I don’t think Jonathan deserves the criticism.”

Another poster, Marvin Davis of Morgantown, West Virignia, stated he’d “rather have our mascot killing a bear with his musket than a bunch of idiot kids in Sissonville re-enacting scenes from … ‘Jersey Shore.’”

“I don’t care if people think West Virginians like to hunt – that’s not a negative to me,” Davis said. “A negative to me is a group of teenagers being paid to enhance stereotypes for the entertainment of the rest of the nation.”