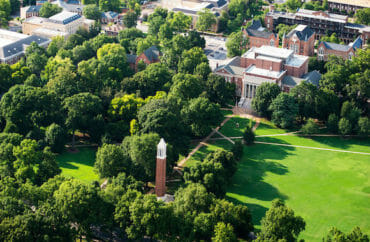 A student at the University of Alabama is no longer enrolled — and may have been expelled — after a video surfaced allegedly showing the student engaging in racial slurs.

If the student was expelled, it could be the second time this year a student was booted from the school for using racist language.

On Wednesday, University of Alabama President Stuart Bell released a statement which read, in part, that the university had “learned of an offensive video involving racist language by a student who is no longer enrolled. We hold our students to a much higher standard than this.”

The statement continued: “We are united in condemning this racist behavior and resolute in our commitment to ensure our students, faculty and staff know they are welcome, accepted and supported on our campus, and that discriminatory behavior will not be tolerated.”

It’s unclear whether the slur-slinger was a student who was expelled after the video surfaced, or simply a former student, or a recent grad. Campus officials refused to clarify. But Al.com reported the student was expelled over the video, and no correction had been issued as of late Thursday night.

The College Fix obtained a copy of the roughly ten-second video in question, which depicts a young white woman in a vehicle who appears to be very drunk. “Get me away from these niggers, seriously,” she says, adding later, “I seriously think niggers are gay.”

University officials would not tell The College Fix whether the student in question was expelled due to the content of the video.

“Because of federal privacy laws, the University has only stated that the student is no longer enrolled,” university spokeswoman Taylor Bryant told The Fix.

The White’s editors stated its members could not identify the culprit, but Greek Life leaders put out a conciliatory statement condemning the video.

“The recurrence of incidents of this nature, and the problems within our community and campus culture, are things that we recognize and collectively aim to eliminate,” the statement from Greek Life leaders stated.

This is reportedly the second time this semester that a University of Alabama student has left the school after a racially charged incident. Earlier this semester former student Harley Barber told The New York Post she was expelled after video surfaced of her stating, among other slurs, “I fucking hate niggers.”

Referring to the incident from January, Ari Cohn, a First Amendment lawyer for the Foundation for Individual Rights in Education, contradicted Barber’s claim, stating that FIRE “has learned that the student was not expelled.”

“I know that she was encouraged by administrators to voluntarily withdraw,” Cohn added.

With regard to this week’s incident, Cohn told The Fix that Alabama’s expelling the student “would almost certainly be a violation of the First Amendment.”

“As hateful and bigoted as the language used in the video may be, such speech is protected by the First Amendment in accordance with longstanding judicial precedent,” Cohn told The Fix via email Thursday night.

“If hateful speech also falls under a category of unprotected speech — such as true threats or incitement to imminent lawless action — it will lose its constitutional protection. But the video in question did not constitute either of those things,” Cohn continued.

In addition to President Bell’s statement, the video was also condemned by the president of the Alabama Panhellenic Association, the leaders of several student groups, and representatives of “the four Greek Councils” at the school.